Perforated metal screens decorate this residential extension built by architecture studio Welsh + Major in a three-metre-wide gap next to a converted grain mill.

Called Darling Lane, the white-painted extension was squeezed in next to a house built in an old warehouse in Sydney, Australia.

Welsh + Major used the airspace over an existing garage to build a two-storey extension to add two more rooms and a bathroom.

The architects also renovated an existing bathroom that used to be suspended from the side of the old grain mill.

Three white perforated metal screens shade a covered balcony on the first floor of the extension. Above, a double set of screens cover a window.

The triangular pattern adds interest to the facade and contrasts with the traditional brick exterior of the main house.

A black garage door on the ground floor adds contrast to the white facade above.

Inside, white paint has been used to decorate both the new walls and the existing brick surfaces of the adjacent warehouse exterior. 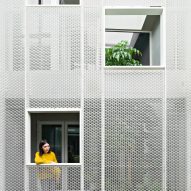 On the first floor, pale timber floorboards cover the balcony floor, and pale wood was also used for the ceiling and the fan that dangles over the living area. Plush grey carpet covers the living room floor.

The new bathroom is tiled entirely in square white tiles, with pale wood floating cabinets topped with marble. Next to the mirrored bathroom cabinet, a wooden shelf frames a plant against the gridded tiles.

Upstairs, the renovated bathroom features dramatic dark walls and a mirrored shower alcove that creates the illusion of a full arch.

Welsh + Major was founded in Sydney in 2004 by David Welsh and Christine Major. In a previous projects the studio carved out a lightwell with a tree for a house, and created a concrete den to act as a garden room.

Darling Lane joins several other projects in Sydney with all-white facades, including a house with distinctive gables, and a home punctuated by a series of arches.

Photography is by Tom Ferguson.