Nouvel's Paris-based firm teamed up with developer Alexandre Allard of Groupe Allard to create Cidade Matarazzo – a 550,000 square-metre complex of historic buildings being regenerated in the city's centre, including the former Filomena Matarazzo maternity hospital.

Nouvel and his team has designed a new 90-metre-tall hotel tower adjoining the historic complex, which will feature a latticed Corten-steel facade.

Plants and trees will be planted across the staggered terraces running around the building named Rosewood Tower and throughout the path that connects the former hospital building to the tower.

"[Matarazzo Park] is a space of calm urbanisation – a space of incredible fig and magnolia trees," said Nouvel.

"The hospital in the middle of the grounds is a sort of mini-town, very well organised around patios, and surrounding this little gem is a chaotic metropolis."

Scheduled to open in 2019, Rosewood Tower will function as a mixed-use cultural and tourist complex, including 275 guest rooms between Nouvel's new building and the former hospital, 122 apartments, two restaurants, a bar and a caviar lounge, three swimming pools and a spa.

The Matarazzo hospital building – which was built in 1943 and laid dormant until Groupe Allard began the project – will house 51 of the hotel's rooms and three of the hotel's restaurants.

Photographs of Starck's showroom, indicate how local materials including marble quarried from the Brazilian states of Paraná and Bahia will be used in the room's interiors. A twisting marble and Corten-steel staircase is depicted as it sweeps down onto the marble floor.

Starck pays homage to the cultural heritage of São Paulo, referencing the plants and trees that can be found in Brazilian Atlantic Forest. Dark wooden dining tables are contrasted with swirling floral rugs, paired with the earthy tones of suede upholstered chairs. All of the suites' finishings are made by Atelier de France.

"In truth, the inspiration behind the design and architecture is both local and international; it is diverse and originates from places like Africa, America, Italy," said Starck.

After being saved by the local residents of Bela Vista – the Matarazzo hospital was then protected by City Hall and the Office of Public Works, until it was finally placed under heritage protection in 1986.

"Jean Nouvel brings a fresh, contemporary foreign gaze that will reveal and underscore the unique beauty of this poetic isle that has lain abandoned for over 30 years," said Allard.

"Jean and I want the Matarazzo complex to be preserved and rejuvenated... [it] will be an original urban landmark, opening a new chapter in the history of transformations the Paulista Avenue region," he added.

The six-star Rosewood Tower hotel is Nouvel's first design for a major Latin-American city. It joins previous plant-filled designs by the architect – who placed at number 40 on the Dezeen Hot List. 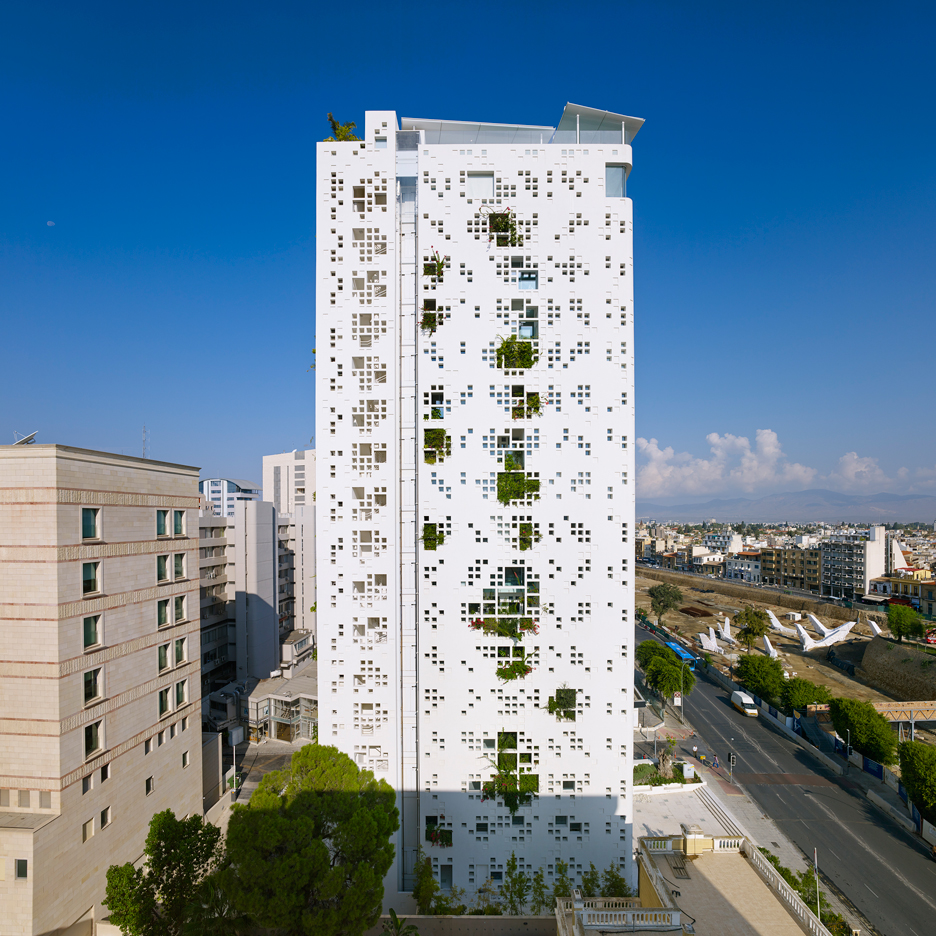 Jean Nouvel's Cyprus tower has plants bursting through its walls

Among the projects is a tower block in Nicosia, Cyprus, featuring perforated walls and wide balconies and the Barcelona Hotel, which has windows shaped like palm fronds and an atrium filled with palm trees.