The Pikpäk packaging concept – which was awarded first place in the 2017 Dieline Packaging Design Awards' student category – is made from Tetra Pak, the same material often used for drink containers.

Designed to be lightweight and cheap to produce, Pikpäk is worn like a rucksack, fastening around the shoulders with fabric cords. A cap allows easy access to its contents, and also means it can be easily refilled when needed.

"The rucksack solves a lot of problems people experience at festivals," said Huber, who created the bag as part of an MA in Communication Design: Graphic Design. "Pikpäk helps people not lose their best place in the front row to get a drink, they can bring it with them on their back."

"No spilling while dancing, no dirt in their drink, and no downing drinks at the bar to have their hands free while pushing through the festival crowd," she added.

Because the backpack is more enclosed than the usual plastic cup, it also reduces the possibilities of people's drinks being drugged. The Tetra Pak box is able to be folded up and reused.

"People want a more eco-friendly material than plastic," added the designer. "It seemed there was a lot of space for improvement and new ideas for drinks and packaging design at festivals."

Huber created a minimal appearance for the backpack, to keep it unisex, partly based on the restrained shapes and colours of Scandinavian design. Pikpäk derives its name from the Swedish phrase "Med pick och pack", which describes having packed all the necessary items. 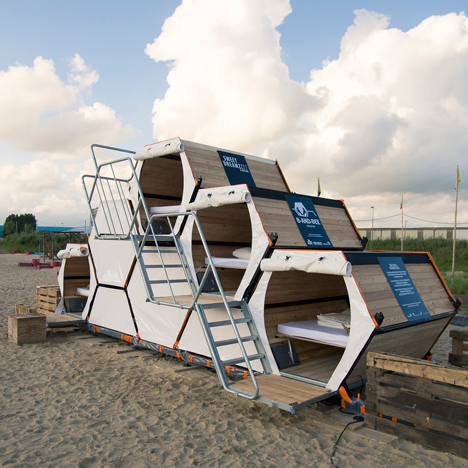 Huber hopes to bring her own prototypes to future summer festivals but currently doesn't have plans to take the project any further.

Other design aimed at music festivals includes a stackable camping concept for people that want to avoid staying in tents and a set of tree-mounted urinals created for revellers at Denmark's Roskilde Festival.