French designer Clément Balavoine has designed flight suits that can be precisely tailored to support the musculoskeletal system of SpaceX travellers.

The microgravity environment of space means that astronauts' bones become more fragile, and muscles lose mass – something that will affect those making the 80- to 150-day trip to Mars that Elon Musk plans to launch in 2022.

Balavoine proposes his company SpaceX adopts these space suits to prevent that from happening. The suits incorporate fabrics with electroactive fibres, which are currently used mainly in sport and for rehabilitation.

These fibres send tiny electric shocks to the wearer's muscles, which help keep them active and also revitalise them. The material could also be used with a health monitor to record movement and vital signs, control heat and also track the effect of the environment on the body.

To combat the effect on traveller's bones, Balavoine designed flexible protective sections for key areas, such as the spine, which work as an exoskeleton to provide extra support.

Using a body scan and an X-ray of each passenger, suits could be accurately tailored to their body, and could also be adapted and combined with a space helmet for outdoor use.

Balavoine used Marvelous Designer and 3dsMax software to quickly prototype the suit – a digital-only technique he previously developed to allow garments to be tailored to a 3D model of the end user.

"It shows how powerful 3D software can be for prototyping in the fashion design process," he said.

Although he told Dezeen the end result is a "futuristic" approach inspired by his love of science fiction, the designer created the suit to conform to existing technologies and materials.

"I truly think that any product must visually reflect its purpose, so I wanted to design a suit that would inspire strength, aerodynamism and calm," he added. 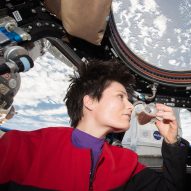 Balavoine, who is based in Amsterdam, studied product design in France before moving to London and collaborating with a number of fashion labels. He later worked as a designer for United Nude in China before striking out on his own.

A team of researchers at Portland State University has also tackled the challenges astronauts face in space, designing a cup that recreates a more earth-like experience of drinking coffee.