Dezeen was media partner for the sixth edition of Beirut Design Week (BDW), which took place from 19 to 26 May 2017.

While conflict in the region has brought over a million refugees to the city's doorstep, Beirut itself has enjoyed peace since the 2006 Israel–Hezbollah War, and many Lebanese designers have returned from overseas to found studios in the capital.

The city's annual design week showcases the work of these local creatives through exhibitions, installations and open studios. Here are six designers and studios that stand out from the pack:

An established design name in Beirut, Nada Debs was born in Lebanon, raised in Japan and educated in the USA, where she studied at the Rhode Island School of Design. This international upbringing informs her work, which mixes Middle and Far Eastern aesthetics in what Debs describes as a "fusion of East and East".

Her creations include carved concrete bowls, bookshelves based on the shape of the traditional Islamic star, and home accessories that employ marquetry to modern effect. She made the four objects in the top image together with fellow Lebanese designer Tarek Moukaddem.

Founded by Hoda Baroudi and Maria Hibri in 2000, Bokja is a textile arts studio based in Beirut. The name of the studio refers to the old Turkish word for the embellished velvet wrapping containing a bride's dowry. As well as being highly recognisable for its with bold, collage-style aesthetic and intricate embroidery, the studio is known for working with local social enterprises on projects that promote the country's artisans and craftspeople.

The duo typically works on rescued vintage and antique furniture, which they reupholster in their own designs, but you can also see their work splashed across interiors, clothing and homeware across the Lebanese capital. They created the installation Homesick, made up of dozens of individual embroidered fish, in their store as part of BDW.

Karma Dabaghi was both an exhibiting designer at this year's BDW and a speaker at the event's Criteria conference, where she talked about the power of speculative design to create real-world effect. She recently returned to Lebanon from the US to teach and run her own design studio.

The conceptual project she presented at BDW was Perpetual Presence, a series of marble objects that reimagine how the ritual of mourning might be practised in the home.

Guillaume Credoz is an architect and designer particularly interested in new digital manufacturing techniques and recycled materials. At Beirut Design Week, he exhibited tiles produced with Beirut Makers, a collective of designers who consider themselves part of the maker movement.

The tiles are 3D-printed concrete, incorporating 40 per cent recycled glass and construction rubble. Credoz is currently working on developing a 3D printing process that uses 100 per cent recycled plastic – a big challenge because the plastic needs to be completely cleaned of debris before it can be extruded.

The sister team of Nour and Maysa Saccal is behind this studio, founded in Beirut in 2014. Their practice spans product design, interiors and architecture, and they aim to "invite emotion and even a sense of confusion in the positive sense".

Among Saccal Design House's products are these marble and brass backgammon tables – the board game is hugely popular in the region – as well as the Link series of coffee tables, which critique the narcissistic leanings of today's society by making more sense joined together.

A graduate of London design school Central Saint Martins, Timi Hayek worked for Marc Jacobs at Louis Vuitton and as assistant to the head of print at McQ by Alexander McQueen, where she got her illustration on a T-shirt.

She now has her own shop and atelier in Beirut, focused on womenswear. 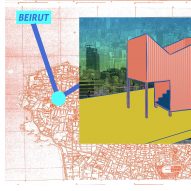