Australian designer Ross Gardam has added to his Polar series of lighting with a wall lamp that can be rotated to create eclipse-like effects.

Its hinged disc-shaped shade is lit from behind, creating circles of light that resemble the phases of the moon. The forms vary with the positioning of the shade, which is easily adjustable.

The circular Polar shade was first used by Gardam for a series of desk lamps, which featured a pivoting arm and reflective material that could be used to control light and shadow.

"The articulation element of the desk lamp translated well for a wall light," Gardam told Dezeen. "In many ways, it lends itself even better for a wall application. It's quite a subtle and simple product but changing the way the light is directed and shaded is quite unobtrusive when done from the wall."

The Polar wall lamps – which launched at Melbourne's Denfair last week – are dimmable, and come in several finishes, including white, black and mirrored gold.

"It's great to see the product being used as a graphic element in interior designs – both residential and commercial," added Gardam, who is also considering adding a floor lamp to the Polar range. "I would love to see the light used in art galleries as it lends itself so well to creating adaptable moods."

The Australian designer set up his studio in 2007, with a focus on creating furniture and lighting that's made in Melbourne by local manufacturers and craftsmen.

He incorporated a similar rotating element into his Aura desk lamp, which featured a magnetically attached shade that could be pivoted 360 degrees to be repositioned.

This year's Denfair also saw the launch of Nau – a furniture and lighting brand that hopes to start a new Australian design movement by showcasing the work of local designers. 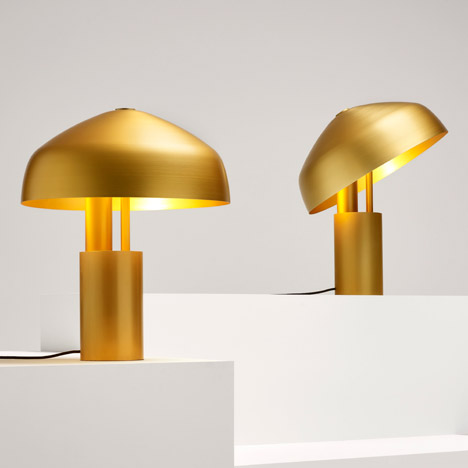