Tokyo Design Week has been cancelled this year following the tragic death of a child at the event last year, with organisers promising stronger safety measures in future.

Dezeen understands that the fair will be relaunched under a new format in 2018.

The annual event, which takes place each November at Meiji Jingu Gaien park in Tokyo, is one of the key events in the Japanese design calendar.

However tragedy struck last year when a timber exhibit caught fire. A five-year-old boy who had been playing in the structure died, and two adults who tried to rescue the child were injured.

The fire is thought to have been caused by an incandescent bulb inside the paper-clad exhibit, which was part of an open-air showcase of student work.

The exhibit that caught fire was designed and built by students at the engineering department at Nippon Institute of Technology. 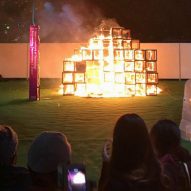 A short message on the Tokyo Design Week website confirmed the cancellation of the 2017 event. A second, more detailed statement confirmed that the student exhibition would also be cancelled.

"I want many people to know the enjoyment of design, I want to give children dreams," wrote Satoshi Tabuchi of the exhibition's executive committee.

"Through such things I took away the precious life, the future and the hope of the child who enjoyed playing at the design event of the students nationwide gathered to convey the possibility of design."

The statement continued: "We deeply apologise to the bereaved family and express our deepest condolences from the bottom of our hearts.  We also deeply apologise for causing inconveniences to all concerned parties. We will stop the school exhibition in 2017 in view of the seriousness of this accident."

Tabuchi said that stronger safety measures would be introduced.

"In the future, as school work exhibition executive committee, we will strive thoroughly that it is design based on social responsibility and safety of designing for students who are studying design," he wrote.

"At the same time, we will strive to prevent accidents by strengthening safety measures and thorough safety supervision."

Tokyo Design Week was founded in 1995 and has been held at Meiji Jingu Gaien – an open area dotted with sports facilities that was originally the outer precinct of the Meiji Jingu shrine – since 2005.

The event was previously known as Tokyo Designers Week. 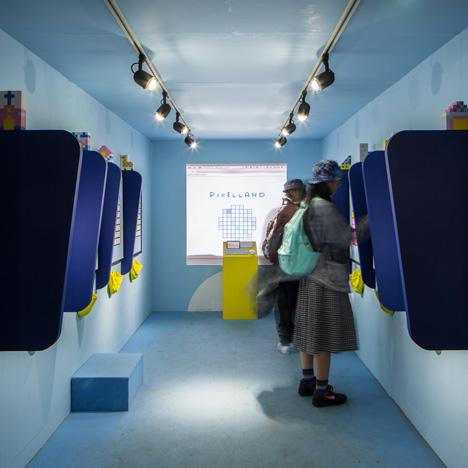