Architect Leo A Daly has overhauled an office complex just outside of Washington DC, creating a verdant campus that aims to foster cooperation among 16 American intelligence agencies.

Daly's firm upgraded a 1940s office campus in the city of Bethesda, Maryland, seven miles (11 kilometres) northwest of the US capital, to create the Intelligence Community Campus.

The campus embodies a new approach to intelligence sharing that emerged after the terrorist attacks on September 11, 2001. The approach was spurred by a report produced by a special 9/11 commission, which recommended more cooperation among intelligence-gathering agencies.

"Responding to the 9/11 Commission Report’s call for increased collaboration among intelligence-gathering services, the $300 million, state-of-the-art headquarters provides a centralised hub for knowledge sharing among the 16 intelligence agencies housed there," said the team.

At the heart of the campus is the Centrum Building, which encompasses 220,000 square feet (20,438 square metres). Clad in glass and red-hued metal panels, the Z-shaped building links three existing structures and "serves as the vertebra of the campus".

"Rather than a single, monolithic building, the design suggests the notion of campus as field, connecting and organising an assemblage of interior and exterior space," the studio said.

The existing facilities were also wrapped in glass and coloured panels – a strategy that helps achieve a cohesive and non-institutional aesthetic.

"Rhythmic patterns of mirror-like glass evoke the forested surroundings and break up the buildings' massing, while a dappled skin of matte metal panels creates a sense of translucency, playing on the idea of natural camouflage," the team said.

The buildings contain a range of open, light-filled workspaces, and more secure areas for training and exchanging sensitive data. Interior spaces are designed to encourage collaboration, and can quickly adapt to changing needs.

Providing connections to the natural surroundings was a guiding concern for the design team. Workers can dine on an outdoor terrace or take breaks in a 14,000-square-foot (1,300-square-metre) plaza.

In order to create a park-like environment, the team removed 20 acres (eight hectares) worth of surface parking and built a more compact six-storey car park instead.

The campus is "on the path to achieving net-zero use", the team said.

The project recently won a building team award from Building Design + Construction, given to projects that exemplify collaboration between owners, architects, engineers and contractors.

Other recently completed government buildings in the US include a metal-skinned cube in New York by SOM that houses an emergency call centre. 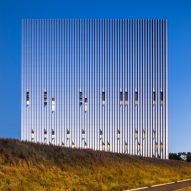