The creators of New York's High Line have launched a platform to advise similar infrastructure reuse projects in the USA. We've rounded up the 18 other schemes in the works, including an OMA-designed bridge with ramps and waterfalls, and an underground park.

The hugely popular High Line park, designed by Diller Scofidio + Renfro and James Corner Field Operations, reclaimed a section of a disused elevated railway line along the Lower West Side of Manhattan.

Robert Hammond, one of the project's founders, has since launched the High Line Network. The initiative allows similar projects in North America, which he describes as "rail-to-trail", to share tips and advice on creating all-inclusive public parks in unusual spaces.

Read on to find out more about the network's 18 other projects:

Set to open in 2019, it will comprise a pair of ramps that slope up to offer raised views across the city, as well as cover to spaces underneath. Waterfalls will be placed at each end, with one linked to a filtration system that will clean the surrounding river water. An open plaza in the middle will host markets, festivals and performances.

Atlanta BeltLine, Atlanta, Georgia by Perkins + Will and Kimley Horn

The Belt Line is designed to occupy a series of abandoned railway corridors to create a route of parks, trails, transit and affordable housing, which will loop around Atlanta and connect 45 neighbourhoods.

Lined with art installations, the open trails will also include a botanical tree garden and parks to host free public activities like fitness classes. The first phase of the project opened in 2008 and it is anticipated to be fully completed by 2030.

The Bayou Greenways 2020 will see over 3,000 acres (1,214 hectares) along Houston's bayous – a marshy outlet of the river – made into a continuous park and hike-and-bike trails.

Aiming to transform the way that Houston's residents journey around the city, once completed it will mean that 60 per cent live within 1.5 miles of a bayou.

In progress for 30 years, the Buffalo Bayou project will revitalise a 10-mile (16-kilometre) stretch along the river in Houston into parks, trails and bridges.

It will take place in stages, with the current phase providing a play area, a dog park, performance pavilions, a cafe, as well as a pair of visitor centres for boat and bike rentals. The next section is planned for the eastern portion of the river.

Occupying what was formerly an army airfield, the mile-long Crissy Field national park includes grassy land tidal marsh, and sand dunes, with 100,000 native plants that were planted by volunteers.

The community-backed project commenced before the High Line in 1996, but is set for a refresh. It currently hosts 1.2 million visitors a year and is home to 125 species of birds.

Measuring 20 feet (6.1 metres) wide, this greenway has enough room for both pedestrians and bicycles to travel between Detroit's east Riverfront, Eastern Market and residential neighbourhoods.

Previously the Grand Trunk Railroad line, the route mainly run under street level with parts passing underneath old structures that are now home to graffiti artwork. Its newest section runs along the Wilkins Street Plaza, which features cyclists with a spot to park bikes and seats to rest.

The inverse version of the High Line, the Lowline will turn an abandoned trolley terminal at the heart of New York's Lower East Side into what is billed as the world's first underground park.

Parts of the infrastructure will be restored and a series of solar arrays will be used to create wells of light in the cavernous park, which will be filled with a variety of plants.

James Corner Field Operations – one of the studios behind High Line – has planned this 14-acre green space atop the tunnelled road to the Golden Gate highway and surrounding parklands.

As well as paths and gardens, features will include a community plaza, a campfire circle, picnic areas and an interactive kids playground. It is currently under construction with its completion slated for 2019.

This community-led project in Queens, New York, hopes to transform 3.5 miles (5.6 kilometres) of disused railway into a park for neighbourhoods that are lacking green space, so local children can connect with nature.

Taking cues from the High Line, the park will be lined with planting and benches, but have separate paths for cyclists and those on foot.

Aiming to "bring together diverse communities and serve as a focal point for the city", Philadelphia's Rail Park will convert an old rail line into three miles (4.8 kilometres) of green space that links 10 neighbourhoods.

It is hoped that it will also kickstart the redevelopment of the city's vacant spaces on the route, which runs along the former Reading Railroad Line.

A masterplan headed by Frank Gehry is set to revitalise the barren canal-like waterway that weaves through Los Angeles.

Currently a work in progress, it includes ideas like kayaking, playgrounds and undulating bikeways that are logged in the LA River Index and yet to be formalised. The public is also invited to submit suggestions.

Named after Chicago's postal code prefix, the 2.6-mile-long (4.2-kilometre) 606 park transformed the abandoned Bloomingdale Rail Line into elevated bicycle and pedestrian paths that spirals to the top of a hill.

Featuring parks and event spaces, the park, which opened in 2015, forms part of a wider mission to create more open space in the northwest of Chicago.

The Bentway, Toronto, Ontario by Public Work and Greenberg Consultants

The underpass of the Toronto's Gardiner Expressway is set to be transformed into a "thriving cultural hub" by 2018.

Another James Corner Field Operations project, the 10-mile-long (16-kilometre) park and urban trail will be located below an elevated rail line in Downtown Miami.

Combining an existing bike trail and with a new pedestrian pathway, the routes will wind through different ecosystems filled with native plants, spaces for art and play, and pop-up structures.

Curving into either side of Dallas' Trinity River, the project will offer the community a series of recreational spaces, including elevated parks and places to gather and walk.

Opening in summer 2021, it also forms part of the city's masterplan to provide protection against flooding.

Austin's neglected Waller Creek is set to be upgraded to 37 acres (15 hectares) of parks and three miles (4.8 kilometres) of bikes and paths opening in 2019.

At its heart, it will feature a green square that will lead down to a pavilion with a gridded roof that will host the cultural arts programme planned for the scheme.

Described as a "waterfront for all", the 26-block-long park on Seattle's waterfront will create elevated overlooks, spaces, and places out of the space left by the removal of the Alaskan Way Viaduct.

Other features will include landscaped gardens designed to bio-filtrate stormwater, the rebuilding of a historic plaza for year-round public programmes, and a direct walkway to the Pike Place MarketFront plaza. 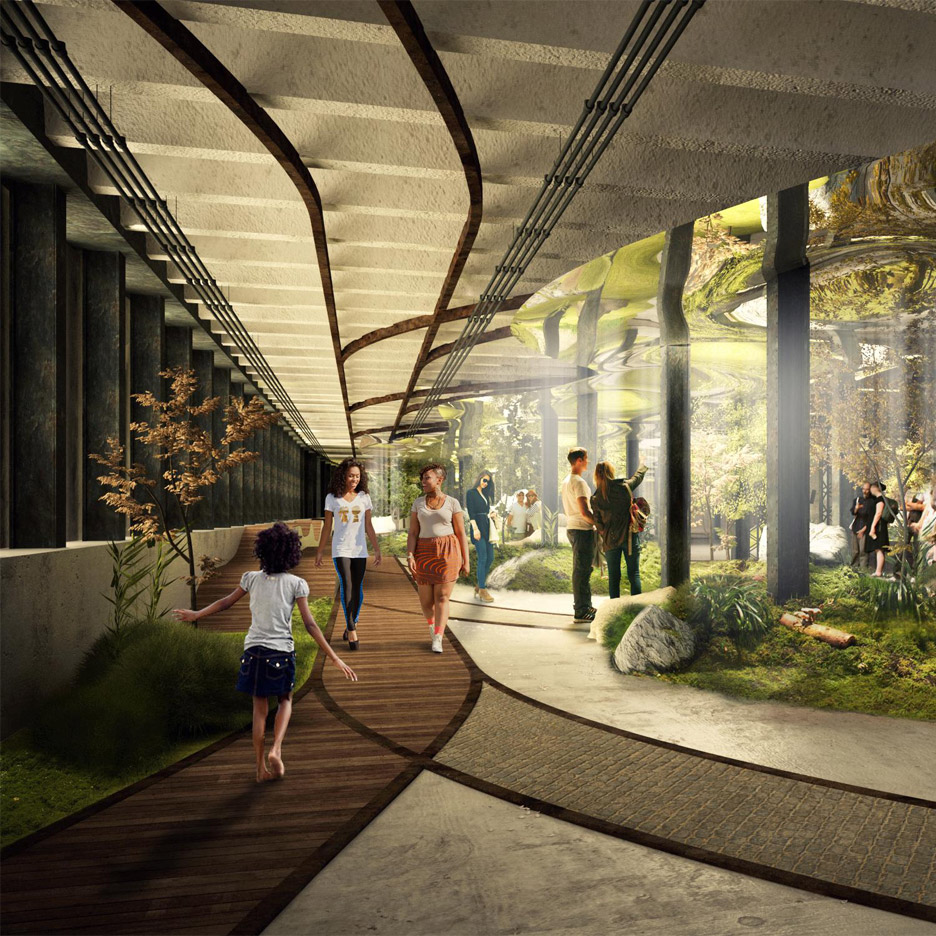