The folded steel facade and roof structure of this terminal for cruise liners in the Chinese city of Qingdao is informed by the sails of boats that set out from nearby harbours.

Shenzhen firm Mozhao Atelier and Jing Studio designed the Qingdao Cruise Terminal for a site on the pier lining the entrance to the city's main port.

The pier itself has been redeveloped to accommodate a park and other recreational services, with the terminal building contributing to the area's public function by hosting exhibitions in its arrival and departure halls.

Landscaping around the building is intended to offer a welcoming green space that is differentiated from the industrial surroundings of the port.

Once completed, the adjacent park and network of pathways will form gardens providing access to the terminal and a harbour offering yacht rental services.

The south side of the cruise terminal is sheltered from the prevailing northwest winter winds and looks out onto the landscaped areas.

"For this project, inspiration for the architectural form came from the sail, which is famous in Qingdao, the city of sailing, as well as the rows of pitched roofs from Qingdao's historical architecture," said the architects.

The folded shapes of the roof transition into the supporting struts of a steel facade that is left exposed to emphasise the raw form of the engineering.

Rather than concealing this structure behind a curtain facade, the triangular sections are filled in with an aluminium grating that provides shade while allowing plenty of natural light to reach the interior.

Outdoor platforms on the third floor of the north facade offer further opportunities for taking in views of the sea. These areas are intended to reference the decks of a ship and can be used for various activities.

Throughout the interior, the roof is displayed wherever possible to provide passengers with a constant connection to the building's impressive structure.

In the arrival and departure hall on the ground floor, a ceiling featuring folded metal panels echoes the geometry of the facades.

Lifts and elevators transport passengers to the foyer and waiting areas on the first floor, where bands of skylights interspersed with aluminium beams create a rhythm of light and shadow along the length of the large hall.

At night the building is illuminated from within and floodlights at the base of the triangular facade sections transform the terminal into a beacon that is visible from the city. 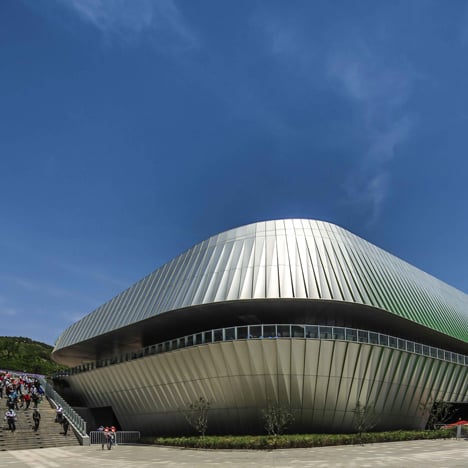