American studio Desai Chia Architecture wanted to capture the "intellectually playful aspects" of Quartz in the design of the digital media outlet's new headquarters in Manhattan.

The Quartz office occupies a rectangular space in a historic cast-iron building in the Flatiron District. Launched in 2012 and owned by Atlantic Media, Quartz runs a popular website focused on the global economy.

Encompassing 25,000 square feet (2,322 square metres), the office was designed to house a growing staff and reinforce the company's brand and culture.

"Our design for Quartz Media accommodates the needs of their rapidly growing office while preserving the quirky, intellectually playful aspects of the company's ethos that they commonly refer to as their Quartziness," said Desai Chia Architecture, a New York-based studio led by Arjun Desai and Kathy Chia.

An open floor plan provides flexibility and encourages employees to take different paths around the office, in turn promoting "chance encounters" with colleagues working in different areas of the business.

In the front portion of the office, separating the entrance from the work area, the team created sculptural partitions made of structural lumber and sheets of black-stained plywood.

The partitions enclose a series of rooms, called Quartzy Spaces, including a lobby, a book lounge, a maker space and a coffee bar.

Integrated into the partitions are shelves holding books, mugs, plants and other decor.

"As these Quartzy Spaces evolve through daily use – for activities like Friday evening cocktails, horticulture, book collecting, robotics and artisan coffee brewing – they will be shaped by the identities and aspirations of the people who work at Quartz," said the team.

In other areas of the office, the architects created a range of meeting spaces, from conference rooms for large groups to phone booths for private calls, interviews and even meditation.

Lining a window wall are wooden storage cubbies and benches for editors, which have become popular gathering spots.

A large event space, called the Arena, was situated in a corner of the office.

The room is lined on three sides with bleacher seating and also features movable furniture, which can accommodate staff lunches, town hall meetings, TED-talk-style presentations and other activities.

"The space has a fully equipped, robust AV system and a deployable stage that allow Quartz to host launch parties, movie screenings and tech symposiums on a monthly basis," said the studio.

"Undulating shelving wraps the room, a play on the oversized decorative moldings found on the facade of this historic cast-iron building."

Other projects by Desai Chia Architecture include a glass box home in the New York countryside and the renovation and expansion of a Hamptons residence. 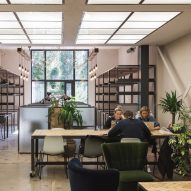 London print factory converted into a co-working space for makers