A former sailor's lodge was overhauled to create this boutique hotel in downtown Portland, Oregon, which includes hostel-style bunkbeds and compact rooms, aimed at design-conscious travellers on a budget.

Located in Portland's Old Town Chinatown, The Society Hotel occupies a cast-iron front building, built in 1881. It was previously used as a hotel for mariners, a hospital and then a Chinese dance hall, but it was abandoned in 1975 and its interiors fell into disrepair.

Matt Siegel, a local building contractor specialising in historic preservation, teamed up with friends Jessie Burke and Jonathan Cohen, and colleague Gabe Genauer, to transform the building into a hotel – with more reasonable prices than local competitors.

"Our aim was to create a unique experience in hospitality in a historic building," Siegel told Dezeen. "We wanted to appeal to adventurous travellers of all ages and to offer a high-quality product on a budget."

"As Portland grows into an internationally recognised destination, affordable lodging is being pushed to its perimeters," he explained. "The Society Hotel is here to fill the gap with low hotel rates and a preserved piece of Portland history in the heart of downtown."

"Lovingly curated as an experiential space for visitors, it brings easy access to the city's exciting downtown, and surrounding neighbourhoods to a whole new group of travellers."

Local firm Integrate Architecture was enlisted for the building's renovation, which involved restoring the cast-iron storefront and the historic brick and stucco walls, and completely gutting the interiors.

Guest bedrooms, 38 in total, occupy the upper three floors. These vary from private suites to rooms with shared bathrooms, to cater to travellers on different budgets.

This arrangement follows the original layout of the hotel.

A 24-bed, hostel-style room occupies the ground floor, featuring eight bunk beds that sleep three people each. It includes fitted curtains, power outlets and reading lights – and is the cheapest option in the building.

Guests are provided with lockers, and are given access to a kitchenette and communal bathrooms.

Although much of the interiors were gutted, the architects maintained historical features like exposed brickwork walls, the staircase and balustrade, and the existing door trim, wooden panelling on the walls and arched windows.

Interior designers Megan Blossom and Reiko Igarashi were tasked with styling rooms to complement these historical elements. This can be seen in the main lobby and bar area, where dark wooden flooring and wall panelling are offset by rows of white circular tables and a weathered leather sofa.

As the tallest building in the surrounding neighbourhood, the hotel also features a rooftop deck with a 360-degree of the city. It hosts a range of activities, from acoustic performances to movies screenings.

Guests are also offered the Society Only Service (SOS), which allows them to text the front desk with requests to enhance their stay. The hotel describes it as a "personal concierge".

The Society Hotel follows a number of others that are breaking with tradition in an attempt to offer guests unique experiences – many in response to the popularity of rental service Airbnb. 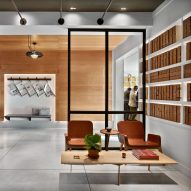