This black woodland house by Robert Hutchison Architecture on the outskirts of Seattle is set around a gravelled courtyard, which provides its residents with a secluded outdoor space safe from roaming elk.

The residence, called Courtyard House on a River, is located in an evergreen forest on the banks of White River, which is a designated habitat for wild elk.

The exterior is covered western red cedar cladding, stained black to blend in with trees. Black wood has been used by a series of architects hoping to hide homes in American forests, with examples including a rural North Carolina cabin, and a long and thin holiday home in Wisconsin.

The other aim was to provide the client, who was also the general contractor for the project, with a "zen-like retreat".

To achieve this, the studio created a courtyard at the front of the residence. Blackened wood walls wrap the space, which features paving stones, gravel flooring and a stone bench, and views up to the trees.

Glazing runs along the front of the house to bring plenty of natural light into the living space behind, while a wall extends in front of the courtyard to maintain the privacy of the yard.

The architects said that the wall, which is punctured by a long opening, also works "to keep the ubiquitous elk herds at bay".

"From the start, through conversations with our clients, all of the schemes were organised around a courtyard with the idea of providing an in-between or transition space between the site and the interior of the house, and to provide light and ventilation to all of the spaces," studio founder Robert Hutchison told Dezeen.

"But with the numerous elk that wander across the site throughout the year, we began to joke that the courtyard space could also serve as the one outdoor space on the site that was reserved for our clients."

The residence is made up of two volumes with long, gently sloped roofs that rise up in alternate directions.

The courtyard is contained in the first volume, along with the guest bedroom and the garage. The main house is formed by the block to the rear, which hosts the open-plan lounge kitchen and dining room, the master bedroom and a covered patio.

While the front of the house has few openings, an abundance of glazing runs along the rear wall, including sliding glass doors that open to the garden.

The spaces inside are double height and finished simply, with exposed wooden ceiling boards and beams, white-painted walls and wooden flooring.

Emphasis is placed on the large steel chimney at the back of the lounge, which forms a wood store facing the patio on the other side.

"The interior focuses on the home's double-height space, a comforting exposed structure for warmth and connection to nature, and the dark steel used for the fireplace anchors the space with a central focal point," Hutchison said. 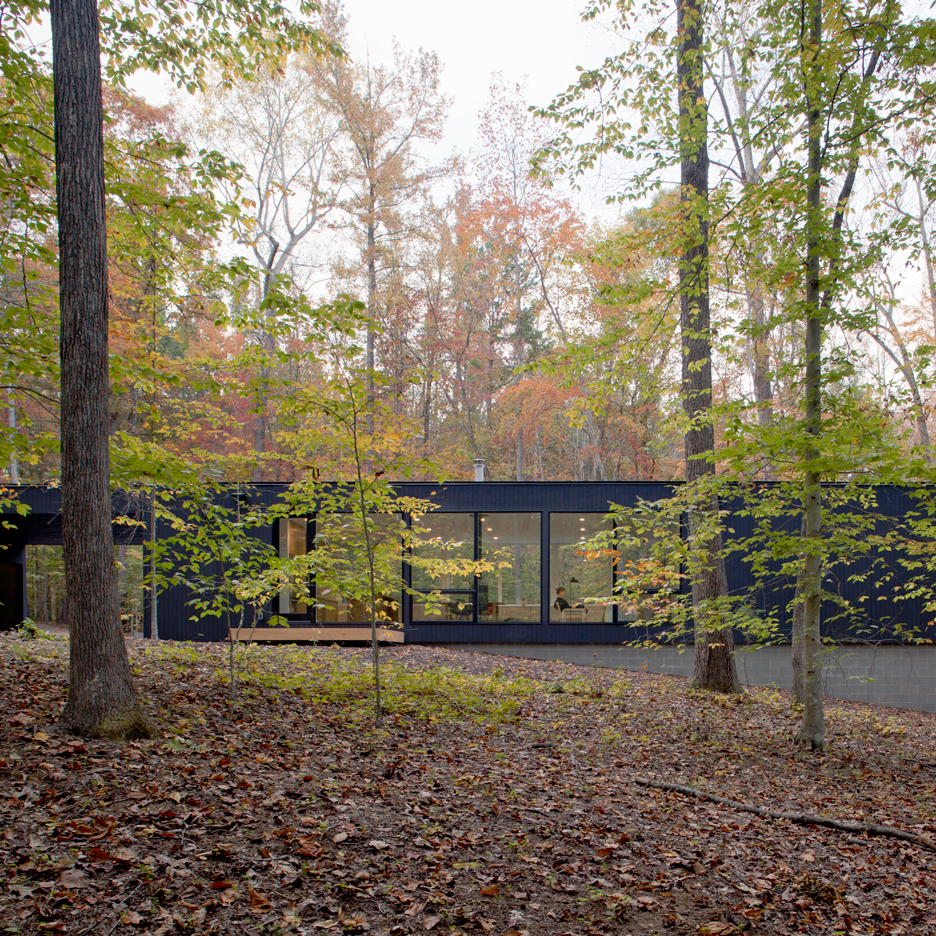 Photography is by Mark Woods.