Loughborough University graduate Tony Elkington has designed a desk accessory that warms or cools individual workers to avoid intra-office wars over the thermostat.

Elkington decided to create Stratum after reading research that revealed temperature is a recurring source of dissatisfaction and disagreement in the workplace.

The device is designed as a more personal and low-power alternative to central heating or air conditioning, and sits within easy reach on the desk.

"The mat replicates the familiar desktop form of ergonomic wrist mats, and the units at either end are wide enough apart to ensure no interference with normal arm movement," Elkington told Dezeen.

Stratum warms or cools the user's forearms directly, which the designer says helps workers adjust more easily to the surrounding environment. It can also be programmed to maintain a specific temperature.

The heat pad self regulates, and is protected by a layer of polymer to prevent accidental burning. According to Elkington, its heating technology emits in the far-infrared range, which has health benefits, including for the treatment of RSI.

The designer, who was enrolled in Loughborough University's Product Design and Technology course, also took into account workers' posture. This led him to avoid wearable designs in favour of something that could be more easily incorporated into the existing desk setup.

The user can programme presets to minimise distraction while working, with the mat taking just three seconds to switch between heating and cooling modes. Elkington designed Stratum to be as unobtrusive as possible, with the mat rolling up when not in use.

"Considerations for its appearance included appropriateness for the workplace, and an inoffensive aesthetic that would not discourage or alienate users based on age or gender," he said.

Italian architect Carlo Ratti has also tackled the so-called thermostat wars, but with a more high-tech solution, creating an office space that offers each worker their own "environmental bubble". 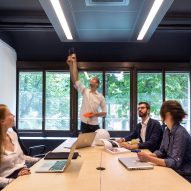