Construction has halted on the skinny supertall skyscraper designed by SHoP Architects in Manhattan due to ballooning costs.

The svelte 111 West 57th Street is reportedly $50 million over budget, so a major investor has filed a lawsuit against the sponsors and lender.

Therefore work has stalled indefinitely on the project, which has so far only been constructed up to 20 storeys.

New York firm SHoP Architects designed the tower to reach 1,421 feet (433 metres) tall and have a height-to-width ratio of 24:1 – giving it claim to the title of world's skinniest skyscraper.

It is located on the stretch of West 57th Street that has been nicknamed Billionaire's Row, due to the number of luxury high-rises springing up there. These include Rafael Viñoly's 432 Park Avenue and Christian de Portzamparc's One57. All three fall under the category of "supertall", which describes buildings measuring from 980 feet (300 metres) tall to 2,000 feet (600 metres) tall. 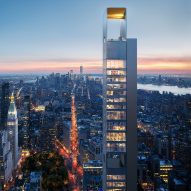 Real-estate investment corporation AmBase is suing 111 West 57th Street sponsors Kevin Maloney and Michael Stern, and lender Spruce Capital Partners, to save what might be left of its $70 million injection into the project.

The lawsuit claims that Maloney and Stren "omitted some very significant items in their budget including cranes, which are very expensive in New York and can run into the millions of dollars", according to AmBase's attorney Stephen Meister.

This is the latest SHoP Architects project to run into trouble, after the firm's plans for a timber-framed tower were axed in March 2017.

However, the studio's supertall skyscraper for Brooklyn received the go-ahead last year, and its copper-clad apartment towers on Manhattan's East Side completed in April.