Shenkar College graduate Tamar Canfi has designed a collection of purposefully unusual eyewear that emphasises rather than hides high-prescription lenses.

Her Eyeglasses range, created as part of the industrial design bachelor's at the Israeli university, is intended to combat the negativity associated with severe myopia.

"The existing frame designs don't suit the thickness of the lenses, and as a result they look odd, adding to the stigma attached to these kind of glasses," said Canfi, who started wearing glasses when she was eight and now has a prescription of -10.

Her designs include a criss-cross frame that surrounds the eye in a diamond shape, and a pair made from several panes of overlapping transparent plastic – designed to create a "tunnel effect" – with a bright orange bridge. Another pair features half-moon-shaped details.

"I designed unusual frames to exaggerate and celebrate the thickness of the lenses, and transform the idea of a disability into a bold fashion statement," added the designer.

"My thinking was that to make this radical solution logical, I should go beyond the bounds of reason: extreme frames for extreme lenses," she continued.

"Many of the top fashion houses are now dictating trends that include exaggerated and oversized lenses, so why not integrate a genuine need with a new trend?"

Canfi experimented with several overlapping designs to begin with, creating versions in wood to test the final effect.

Earlier in the year, Israel's Design Museum Holon hosted a show that featured radical eyewear concepts, including spectacles designed to resemble the compound eye of a fly and a lens that's worn as an oversized ring. 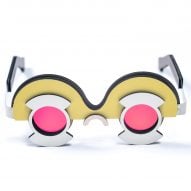 15 radical concepts for the future of eyewear

Photography is by Yaara Agnon.