A fire broke out at one of Dubai's tallest skyscrapers in the early hours of this morning, causing the evacuation of over 600 residences and reigniting debate about the safety of materials used in high-rise buildings.

Dubai Civil Defense services announced it was dealing with a fire at the 337-metre-high Torch Tower at approximately 2am local time this morning, and that the blaze was brought under control by 4am.

The 79-storey residential skyscraper was evacuated and no injuries have been reported.

Dubai Media Office tweeted a video of the aftermath of the fire, which appears to have affected one corner of the tower and also caused damage to several cars parked on the adjoining street. It is unclear how the fire started.

#Dubai Authorities release a video of the aftermath of the fire at the Torch Tower. The fire was brought under control without any injuries. pic.twitter.com/FD4rCiRkud

This is the second fire to have broken out at Torch Tower in as many years, with an earlier blaze on 21 February 2015 also forcing its evacuation.

Shortly after the 2015 fire, Dubai Civil Defence announced it would begin equipping firefighters with jetpacks to help them tackle flames in fires at some the city's tallest buildings.

Located at the mouth of Dubai Marina, the tower's design was drawn up by architecture firm Khatib & Alami.

It was completed in 2011 – just two years before the United Arab Emirates revised its building safety regulations to require all new builds over 15 metres to have fire-resistant cladding. Older buildings were exempt from the updates to the regulations.

The flammable aluminium composite panels used to clad the tower were blamed for the rapid spread of the 2015 fire. The United Arab Emirates issued new fire safety rules earlier this year that requires buildings with flammable cladding to be retrofitted with fire-resistant panels.

Aluminium composite cladding, which comprises a thermoplastic and foam insulating core, was also used on London's Grenfell Tower and is believed to have contributed to the fast spread of the fire that killed at least 80 in June.

Following the Grenfell disaster, fire safety tests were ordered on aluminium composite cladding systems used on towers throughout the UK. These tests have all shown that the material does not meet current UK building regulation and fire safety standards.

A review of UK building regulations and fire safety is now underway.

Torch Tower was briefly the world's tallest residential building when it completed in 2011, but was surpassed by skyscrapers including the 426-metre Marina 101, the 414-metre Princess Tower and the 392-metre 23 Marina.

Residents are currently being sheltered in three nearby hotels, according to the Dubai Media Office, which has tweeted images of firefighters rescuing pets from the building. 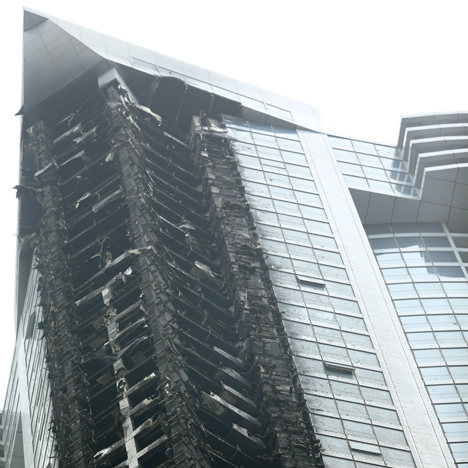