Official statistics published by the UK government reveal that white males are dominating the creative industries, with women filling less than 40 per cent of jobs – although the gap is narrowing in architecture and design.

A report published by the Department of Digital, Culture, Media and Sport (DCMS) in late July charted strong economic growth in its sectors – but also highlighted a lack of racial and gender diversity.

However, the sector is more male-dominated than the UK workforce overall – although in both architecture and design, the gap between the number of male and female employees is narrowing.

But the bias towards men was far greater in figures relating to the creative industries specifically. In 2016, 63 per cent of job roles were filled by men and 37 per cent by women. In comparison, men made up 53 per cent of workers across the whole of the UK and women 47 per cent.

The figures did show some improvement. A report that looked more closely at employment within each sector showed that the number of women working in design and designer fashion increased by 23 per cent between 2015 and 2016 – the second highest increase across all of the nine creative industries sub-sectors after advertising and marketing.

And architecture saw the third biggest rise in number of female workers within the creative industries, with an increase of 13.2 per cent between 2015 and 2016.

The issue of gender inequality in design has been a much-discussed topic of late. Industry studies have found a huge disparity in pay, as well problems relating to long hours and childcare. Figures from the 2016 Women in Architecture survey released earlier this year showed salary discrepancies of up to £55,000 between female employees and their male counterparts, and widespread discrimination in the workplace and on site.

In response to the issue of gender imbalance on design conference panels, Australian studio Double Days introduced a publicly editable directory of women in design that can be used by conference organisers to source female speakers for panel discussions, while a new US initiative aims to spotlight architecture firms that treat workers fairly.

Racial diversity in creative industries is worse than gender diversity

The DCMS statistics also showed the sectors' workers continued to be predominantly white. Among all jobs in the DCMS sectors (excluding tourism), 88.8 per cent of jobs were done by people from a white ethnic group – a similar proportion to the UK population as a whole (88.2 per cent). This varied among DCMS sectors, from 93.0 per cent in sport to 84.9 per cent in telecommunications.

Of all of the DCMS sectors, the creative industries and the digital sector employed the highest proportion of EU nationals, who make up 6.7 per cent of jobs – which would be threatened if Brexit brings tighter immigration controls.

The DCMS sectors cover the creative industries, arts, culture, digital, sport, tourism, heritage, gambling and charities, and make up a total of 16.1 per cent of all jobs in the UK.

The department tweaked its name last month to include digital in the name. Before, it was simply the Department for Culture Media and Sport (although the DCMS acronym has survived untouched).

The name change acknowledges the way the department's remit has evolved.

"DCMS celebrates its 25th anniversary this year, and it is fitting now to include 'digital' in the name," said culture secretary Karen Bradley in a statement. "The department has taken on significant new responsibilities in recent years, so that half of its policy and delivery work now covers the digital sectors – telecommunications, data protection, internet safety, cyber skills and parts of media and the creative industries."

This new focus on digital is reflected in this latest research. The report shows that the sector made the greatest contribution to UK exports among the DCMS sectors. In 2015, it exported £14.8 billion worth of goods (13.4 per cent of total UK service exports in 2015), followed by the creative industries, which exported £14.7 billion (7.2 per cent).

Most creative industries are thriving, but craft is struggling

Overall, the picture is positive for the UK's DCMS sectors, with employment growing 11.3 per cent to 5.2 million jobs since 2011.

The largest percentage growth came from the creative industries, where employment rose by 25.4 per cent between 2011 and 2016. Over the same time period, UK employment increased by just 7.6 per cent.

Within the creative industry sub-sectors, the statistics showed that the the biggest growth in employment was within the design and designer fashion sector, which saw a rise of 57.4 per cent, growing by 58,000 employees between 2011 to 2016.

Conversely, the craft industry saw a steep decline in workers, with figures dropping by 25.5 per cent in the same time period (2000 fewer workers), while architecture only saw a slight rise of 4.2 per cent, welcoming an additional 4,000 workers in the five-year time period. 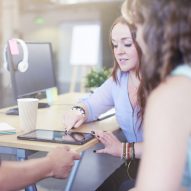