Australian design studio Dowel Jones has expanded its Hurdle seat into a full collection, which includes a bench and a stool reminiscent of a tennis umpire's chair.

Dowel Jones is the Melbourne-based studio of Adam Lynch and Dale Hardiman, who founded it three years ago after collaborating at university.

They first debuted a version of the Hurdle chairs in 2015 at the Broadsheet Restaurant, a pop-up dining concept run by Australian city guide Broadsheet.

Its subsequent popularity in the hospitality market inspired them to expand the product into a full collection.

"When we released the Half Hurdle Chair, it was different to other things on the market," Lynch told Dezeen. "It was a stool, but it was sort of a chair."

"I think a lot of its success probably came from the project we did with Broadsheet – the Broadsheet restaurant," he continued. "We were only really at concept stages with the actual chair, so we developed this stool to suit their restaurant.

"Our biggest market is hospitality so doing something for them was pretty handy."

The Hurdle collection comprises timber seats with frames made of white powder-coated tubular steel. In its initial guise, it took the form of the Half Hurdle Chair and the Full Hurdle Chair, the latter of which featured a full timber backrest over the tubular steel.

Both of these models have now been stretched into tall bar stool variants, the Half Hurdle High Chair and the Full Hurdle High Chair. With their white frames and high backs, they recall the shape of umpire's chairs on a tennis court.

The chair has also been elongated horizontally into the Half Hurdle Bench.

The studio has also created tall version of its existing Sir Burly Stool, which has a similar shape to the Hurdle range but fattened into a silhouette the studio describes as "playfully chunky".

The range can be customised with two-seater and four-seater benches, central tables and upholstery, using the same parts.

"We produced everything based on componentry, so a lot of similar components are used on every chair, they're just lengthened," said Lynch. "That's how we still manage to manufacture in Australia in a cost-effective way, because single pieces can go to multiple chairs." 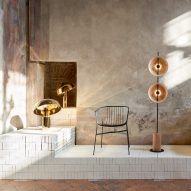