A frame dangling with colourful ribbons and a wooden tree cocoon are some of the outdoorsy installations on display at the International Garden Festival in Quebec, Canada.

The theme of this year's festival is Playsages — a play on the words play and paysages, which is French for landscape. The organisers wanted "to re-think play", while also considering the "growing distance and alienation from the natural world".

"We spend less time outdoors... and when outdoors, we often observe the landscape with an electronic tool in our hands or mask the sounds of the natural world with ear buds," they said.

The most noticeable design of the series is the vibrant Vertical Line Garden by Canadian designers Julia Jamrozik and Coryn Kempster. Loungers can relax on deck chairs underneath a canopy of multicoloured strands swaying in the breeze.

Another highlight is a cocoon-shaped, wooden hut built around a tree named La Chrysalide, constructed by landscape architects Gabriel Lacombe and Virginie Roy-Mazoyer. The title of the work is a reference to the hard outer shell of a caterpillar that is discarded after it transforms into a butterfly or moth, which the structure mimics.

A chrysalis also implies a preparatory or transitional state, and Lacombe and Roy-Mazoyer said the structure is an "invitation to take a break in time, between childhood and adulthood, to climb into the tree, make a nest and lay there to dream."

A collection of tree stumps by Atelier YokYok from Paris create another unusual playground. The stacked blocks form an area for children to clamber around under the shading trees, and is called The Woodstock.

Canadian architect-designer duo MANI designed a giant playground of yellow tubes titled Paysage Euphonique, which visitors can crawl inside and listen to echoes in.

Other installations in the series include a tree swing by Spanish architects Francisco A Garcia Pérez and Alessandra Vignotto, a collection of wheelbarrows filled with greenery by Collectif Escargo, and a wooden deck-space made for lying down and listening to nearby bells by Johanna Ballhaus and Helen Wyss.

Now in its 18th edition, the International Garden Festival will be on view until 8 October 2017 at Les Jardins de Métis – also known as Reford Gardens – a Quebec heritage site. Last year's edition included a shadowy room with gabion walls and a suspended canopy made of wooden slats, while a reflective disk of water that mirrored the trees and sky was installed in 2014. 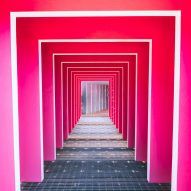