Dutch office UNStudio has devised a solution to the "impersonal homogeneity" of high-rises in many Asian cities – add colour and patterns to the exteriors.

These colours help to create zones within the blocks, but also gives each residence its own unique identity. According to UNStudio, the addition of colour "not only reinforces identity, it also establishes community".

The project was commissioned by property developer Hyundai Development Company, which has built tower complexes across South Korea under the brand I Park, including the Daniel Libeskind-designed Haeundae I Park Marina Complex in Busan.

The company asked UNStudio – with whom it had previously worked with on a project in Suwon – to transform the newly built I Park by Wolbae station, west Daegu.

As is the norm for towers in cities across Asia, from metropolitan centres like Hong Kong to new cities like Songdo, near Seoul, the development consisted of of approximately 30-storey-high blocks, all with uniform facades.

The firm saw this as an opportunity to develop a "provocative yet investigative, affordable and health-focused proposal" that could become a new model for South Korea. According to the designers, high-rises apartments are the most popular type of home in the country, so finding a way to foster communities within these types of development is an important concern for the country as a whole.

"Contrary to popular belief, many of the luxuries commonly associated with high-end residential developments are no longer limited to the affluent alone," explained the team.

"A growing consciousness of all things beneficial to health and happiness is resulting in a trickling-down effect and a widespread societal demand for healthy living environments," they said. "Today's residents want convenient shared amenities, which encourage a sense of community, and promote physical and psychological wellbeing."

Drawing on the city's heritage as a textile manufacturer, the designers developed two distinct colour blocking systems, one for each of the two urban blocks.

The first is made up of a "matrix" of horizontal bands, designed to treat each window, door and balcony differently. The second works in a similar way, but does so with diagonal stripes of colour.

As well as the new facades, UNStudio also collaborated with landscape firm Lodewijk Baljon to create communal courtyards in the spaces surrounding the buildings, including large areas of planting, a 400-metre running track, water features and a walking trail.

Through these two changes, the I Park complex is now being billed as a neighbourhood that promotes both identity and wellbeing.

"The pointillist composition of the facades lends both the individual apartments and the whole development a distinct and recognisable identity within Daegu, while the nature-filled courtyards are a singular feature that offer the residents a safe and healthy lifestyle on multiple levels," said UNStudio principal  Ben van Berkel.

Van Berkel founded UNStudio in 1988 with partner Caroline Bos. The studio ranked at number 55 on the inaugural Dezeen Hot List.

Although based in the Netherlands, the firm has worked on numerous other projects in Asia, including a Shanghai shopping centre, a Singapore university campus and a Beijing housing complex. 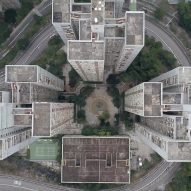 Photography is by Edmon Leong and Rohspace. Movie is by Rohspace.