Designed to resemble a speaker, the building contrasts the exposed concrete of the neighbouring building with a central glazed section flanked by "shell-like" metal panel cladding.

To the northeast, the building's "quiet side" is more enclosed, while to the southwest it opens up with glazing and balconies overlooking an adjacent park.

"It is designed to be more reminiscent of a product than a building; one in which every design feature has a performative function," said the studio.

"The new YG HQ aligns in height, floors and functionality with its older brother, while creating a new impulse for this location and an organisation that is enabled by its unique positioning between city and park."

The offices are organised around a four-storey skylit atrium that provides a meeting point for all of its users that pulls light deeper into the building's plan.

A series of projecting "pods" with large windows overlook this atrium, providing spaces for either working or resting.

"This area acts as a central stage for the lower level offices and the recording studios, as well as for the users, staff and visitors," said the studio. 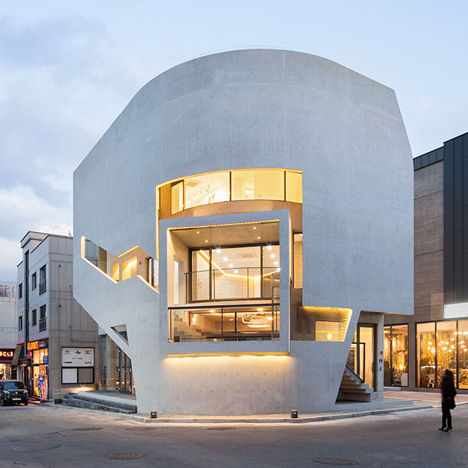 All of the office spaces have been organised on the park side of the building to ensure daylight across the floors.

Way-finding is incorporated into the interior design through colour-coding and sweeping lines that mirror the geometry of the building.

Lighting is integrated throughout, in strips that follow the lines of the interiors and in panels underneath the staircases, intended to turn the office into a glowing beacon at night.

"In the evenings the illumination concept of the various interior zones employs the facade lines to reveal a glimpse of various layers within the building, accentuating the quality of performance inherent to the entertainment and music industry," said the studio.

In the nearby city of Seongnam, Korean architect Moon Moon also designed a building for a K-pop agency, the K-Pop Curve, which features a curved concrete frontage.