Chunky concrete pillars support the upper storey of this university building in Lebanon, which rises above its sloping site to offer views of a nearby walnut grove and the Mediterranean Sea.

The Sheikh Nahyan Centre for Arabic Studies & Intercultural Dialogue (CASID) was designed by local firm Fouad Samara Architects as the latest addition to the campus of the University of Balamand in Lebanon's Al Kurah district.

The building's design is an attempt to represent the university's progressive ethos through its modern reinterpretation of vernacular building typologies.

Another factor that influenced the form is the gently sloping site, which provides a vista across the surrounding campus and towards the sea in the distance.

The centre is situated on the upper portion of the plot to maximise the views, and features a three-sided configuration that encloses a central garden.

The layout allows the building to be accessed from all sides and from various levels of the landscaped grounds, which include a private inner garden with stepped seating.

"A modern interpretation of the traditional courtyard buildings of the Levant, CASID is not a fort-like structure," said Fouad Samara Architects. "On the contrary, it knits itself into the site, opens to all its surroundings, and engages with them."

"A forum for the entire campus, it opens up towards the west, symbolising its role as a vehicle for intercultural dialogue."

The western section of the centre incorporates the main entrance beneath a concrete volume that is raised off the ground by rows of concrete pillars, and cantilevers towards the horizon at its end.

The opposing eastern wing follows the hillside to create space inside for an auditorium wrapped in glazing. Similar pillars within this room hold up the floor slab above, which connects all of the building.

Between the two wings, the southern section of the centre rises up two storeys above the garden and appears as a continuation of the sloping landscape. This connection with the site is reinforced by the introduction of rooftop spaces covered with plants.

"The roof is seen as the fifth elevation, clearly visible from the hills around," the architects added, "and is therefore developed into an accessible green roof preserving the planted heritage of the site and providing another public space with unparalleled views."

Glazed walls that wrap around the public areas on the ground floor enhance the connection with the surroundings and create a sense of continuity between internal and external spaces.

Glazing also covers parts of the upper floor, where aluminium sun baffles are employed to protect these surfaces from western sunlight. The rhythmic spacing and sizes of the louvres represents an abstract take on traditional Mashrabieh screens.

Elsewhere, the structural elements of the building are articulated in reinforced concrete that contrasts with the lightness of the glass. Non-structural walls and ceilings are painted white, and basalt floors transition from inside to outside. 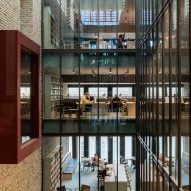