Floor-to-ceiling windows allow guests to wake up to views of the Dolomites at this complex of copper-clad holiday apartments in northern Italy by Plasma Studio.

Called Villa Drei Birken, the new apartment block is nestled into a slope, which faces towards the Dolomites mountain range in South Tyrol.

Large expanses of glazing run along the southern wall to offer a panoramic view towards the mountains. On the western side, the window follows the slope of the hill.

"The facade opens through a V-shaped surface from the totally closed north facade to the south glazed facade, which is directed to the sun and the panoramic view of the Dolomites," said the architects.

The architects chose materials that would help blend the building with the hues of its natural surrounding environment, and that would weather well.

Balconies that wrap the building on the southern side are made of larch wood, treated with a solution of iron sulfate, providing a greyish colouring that also protects the wood.

"Copper and larch wood are exposed to a natural change of colour caused by the atmospheric influence of sun, rain and snow; this phenomena accentuates the integration of the building in the natural environmental," said the studio.

Larch wood also lines a staircase at the entrance on the northern side. It leads up through an opening in the green roof to access another terrace.

The six one-bedroom holiday apartments are arranged in two sets of three. The bedrooms and lounges are placed on the window-facing side to gain the best view and open onto either covered patios on the lower level or balconies on the top floor.

The lounges form a slim, open-plan space with the kitchen and dining room at the rear. Kitchen cabinets are dark to form a contrast with the white-painted walls and the wooden flooring.

The dining area facing this comprises a small wooden table and a built-in bench.

Villa Drei Birken is located in a residential commune called Sesto. Other projects that Plasma Studio has completed in the same commune include another set of six apartment blocks with jagged copper balconies and an extension to a residence that looks like it grows out of the hillside. 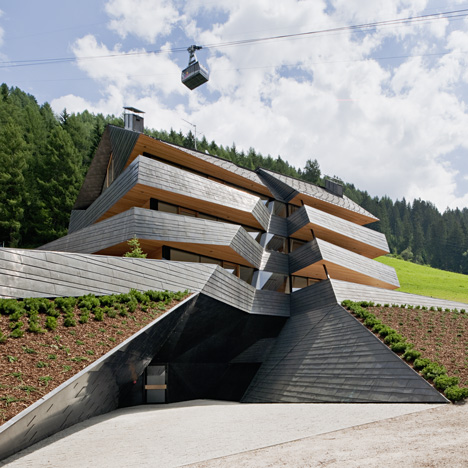