Lego has flown a drone over its BIG-designed visitor centre in Billund, Denmark, to capture footage of its stacked-block formation and the huge Lego-style brick that tops it.

Due to open next month, the building is made up from 21 white blocks stacked like a pile of the brand's famous toy building blocks.

As captured in the drone footage from above, the largest block crowning the building features a two-to-four ratio, like a Lego brick. It is punctured by eight circular skylights bearing a similarity to the holes included on the bricks to allow them to slotted together.

Danish firm BIG first unveiled plans for the centre in 2013. The firm's founder Bjarke Ingels told Dezeen in an interview in 2014 that this aerial view formed part of his original design intentions.

He said that the crowning block will "make the whole building recognisable as a Lego brick from Google Earth".

The movie also shows the series of terraces that are set into the roofs of the lower volumes.

While the walls of the building are clad in a white clay tiles, these roofs are brightly hued to resemble colours used for the children's toy blocks.

Terrace playgrounds are installed with Lego-stye toy furnishings, a helicopter, a rocket and chairs and tables. Each will be linked by a staircases that run both inside and outside the blocks free for the public to explore.

Located in Billund – where Lego was invented in 1932 – the building will also include exhibition spaces and three restaurants. In one of these, called the Mini Chef restaurant, customers will place orders on Lego bricks and be served by robots.

Lego House will open to the public on 28 September 2017 and was included in Dezeen's buildings to look forward to in 2017. Ahead of its opening, Lego has also unveiled a model set of the Lego House. 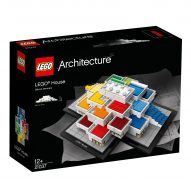 BIG has recently completed work on a subterranean museum beside a Nazi bunker in Denmark and unveiled long-awaited plans for a new headquarters for Google in London.