Provocative graphic design causes a storm in this week's comments update, as readers react to an anti-Nazi logo designed to protest against Trump and a controversial rebrand for Serbia.

Unite the write: after Donald Trump's reaction to racist events in Charlottesville became the focus of last week's comments update, an anti-Trump logo based on Nazi symbolism has taken the debate further.

"Portraying politicians you don't agree with as Nazis is the lowest form of argument," protested Spikes.

"The modern left is capable of nothing but screaming the term 'Nazi' in an attempt to silence anyone who disagrees with them," agreed regular commenter Atlas.

"I think it's fair to call them Nazis when they are proudly flying the Nazi flag," hit back HiKoo, referring to recent rallies attended by Trump supporters.

Others claimed that Trump's actions as president have validated the criticism:

Is it fair to compare Trump and his supporters to Nazis? Have your say in the comment section ›

Balking Balkans: Serbia has been given a minimal rebrand that emphasises peace by graphic designer Vladan Pavlović, but readers say his proposal is unlikely to be embraced by the country's citizens.

"Serbia is re-inventing itself, but these suggestions are unnecessary and politically motivated," wrote Sofija.

Some commenters felt the redesign ignored historical context. "Another product of pre-designed "thinking" for a targeted audience," wrote Nemanja. "Vladan emphasises and imposes the new-age ideology above historical reasons, feelings and obligations."

One reader would have preferred to see the rebrand incorporating new colours:

Plant-based: could trees prevent terrorist attacks? Italian architect Stefano Boeri thinks so, but not all readers are convinced that new barriers will eliminate risks faced by European cities.

"Trees won't work," wrote a despairing JayJay. "Public squares were meant to be meeting places, but certain individuals are preventing that from being the case and we cannot solve it.

We need to accept that the squares, piazzas, forums and markets of the old Europe are no longer with us."

Regular commenter Geofbob rebuffed his claim. "Yes, major European cities have to take sensible precautions to minimise the risk of the sort of vehicle-based terror attacks we've seen recently," he said. "But treating these attacks as though they heralded the end of an era would be crazy."

But some commenters defended the suggestion. "I think it's a great idea. The plants would act as a safety towards citizens and tourists, and help with pollution at the same time," said Steve.

One reader tried to put the threat of terrorism into perspective:

Gone gardens: demolition has started on Robin Hood Gardens, the post-war housing estate well-known for its brutalist style, and readers are either celebrating or paying their respects.

"It's just a shame it has taken this long to start demolishing this hideous eyesore," wrote Atlas.

"Why all the sadness? The building created a ghetto and excluded instead of included," beeped a user called R2D2.

But supporters of the building expressed equally strong opinions. "Architectural genocide en masse," wrote Kay. "When you destroy a whole era of architectural heritage without a blink, in such fast frequency, all over the country – it is intentional, you are trying to erase that era from people's heads for good."

"I agree with the sentiment that it is an erased part of history," said Tierra Designs Ltd. "It is a symbol of poverty."

Dezeen contributor James Brillon is sad to see the estate go, but for a different reason: 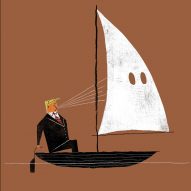 "Freedom of speech is fine, as long as it does not stir up racial hatred"