Located on the idyllic eastern shore of the city, the Mount Pavilia complex was commissioned by New World Development as part of a lifestyle concept it calls The Artisanal Movement, which focuses on creativity, craftsmanship and community.

The complex combines low-rise housing with a landscaped sculpture park, a gallery, an onsite restaurant, bar and cafe, as well as an organic food store.

Minsuk Cho, who was awarded the Golden Lion for best pavilion at the Venice Architecture Biennale in 2014, designed a pair of bright white buildings that provide a clubhouse and retail spaces. The project is Cho's first in Hong Kong.

A sweeping bridge connects the two blocks to form a gateway to the development, which includes 680 apartments set in 25,000 square metres of landscaping.

"This project is located on the corner of a linear string of residential blocks. The new design proposal naturally links two edges of the residential buildings by creating a continuity," said Cho. "The building is constantly creating new gallery experiences and surprising journeys throughout all levels."

"It provides a vibrant setting for the residents of this comprehensive development, and further invites and allows neighbours and outsiders to engage with the various activities, with a luring first-impression of the entire complex," he added. "This entry gateway acts as a large framed window into the community within, and vice versa."

The White Yard Club features a combination of flat and wavy glazed facades that faces a sunken swimming pool, and contains lounges, games and music rooms, as well as sports courts and a gym.

The building is made from a combination of white concrete and brick, with a delicate perforated blockwork screen running along the facade of the upper floor.

Adjoining it, the White Yard Gallery hosts a bar and restaurant on its ground floor, with an organic food market, a cafe and laundry services on the two levels above. The Chi Art Space is set on its uppermost floor.

Landscaping around the development provides residents with an approximately 400-metre-long hiking trail and 950-metre cycling track, while a playpark designed by Amsterdam-based studio Carve is designed to cater to a range of age groups, from toddlers to older children.

The gardens are intended to double as a space where children can learn about the concept of sustainability through hydroponics.

Cheng also commissioned four artworks in response to the theme "home" to set the scene for the development. Gao Wei Gang references children's building blocks in his piece, which sees large marble forms arranged to create a house. Tatiana Trouvé's artwork, a bronze mattress flung over a low wall, acts as a waterfall in the development's garden.

At first appearing as a chain of beads, Jean-Michel Othoniel's sculpture outlines the motion of water droplets splashing up a plinth, while a wedge cut from an apple-shaped sculpture by Kum Chi Keung doubles as a seat.

Slated to complete in March 2018, the Mount Pavilia development contains largely three- and four-bedroom apartments to appeal to a family market.

New World Development is led by entrepreneur Adrian Cheng, who serves as executive vice-chairman. He is a patron of the arts in China and Hong Kong, and is the founder of the K11 "art mall" and the K11 Art Foundation.

Cheng has also made a foray into design, displaying a furniture collection created with Shigeru Uchida at this year's Milan design week.

Among New World Development's recently completed projects is a tower with a rooftop park in Hong Kong, which has just been shortlisted for this year's World Interior of the Year. 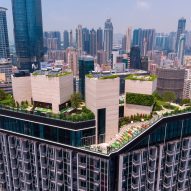