Set designer Es Devlin has been awarded the most coveted prize at this year's British Land Celebration of Design Awards, which also see Paul Priestman, Margaret Calvert and Julian Melchiorri recognised for their work.

The four medal winners were announced ahead of this year's London Design Festival, which takes place later this month.

Each winner will receive their award at a ceremony towards the end of the week-long festival, and examples of their work will be on show at a dedicated exhibition at the V&A.

Devlin, considered to be one of the most sought-after set designers in the world, has been awarded the biggest of the four prizes – the Panerai London Design Medal.

The Brtish designer began her career in theatre, and has gone on to create backdrops for musical acts including The Weeknd, Kanye West, Lady Gaga and U2. She also designs catwalk show sets for the likes of Louis Vuitton and previously created a scent-infused mirror maze for Chanel in London.

Earlier this year, Devlin caused a stir with her set for singer Katy Perry's politically charged Grammy Awards performance, which featured a picket fence that grew into a wall – a reference to the barrier Trump intended to build between the US and Mexico.

She is the 11th winner of the prize, which has been awarded annually since 2007 to an individual or group that has demonstrated "outstanding contribution to London and the industry".

She follows in the footsteps of designers including Peter Saville, Zaha Hadid, Paul Smith, Thomas Heatherwick and, most recently David Adjaye.

The awards programme also presents medals for design innovation and emerging talent. Paul Priestman will receive the Tanqueray Design Innovation medal for his work as head of design studio Priestmangoode.

Under Priestman, the studio has developed a vast array of projects – from a scooter that encourages older people to stay active for longer to a seating design that aims to tackle train overcrowding.

Julian Melchiorri, who graduated from London's Royal College of Art, will receive the Storey Emerging Talent Medal. The designer previously created the "first man-made biological leaf", which he believes could enable humans to colonise space.

The London Design Festival takes place across the UK capital from 16 to 24 September. 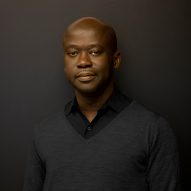