Instead of presenting a new collection during London Design Festival this year, Faye Toogood has brought together works from 50 designers, artists and architects for an exhibition named The Trade Show.

Toogood's Trade Show is based on the format of furniture fairs, which see multiple designers presenting their new products to the public.

She asked designers, architects, and artists – including Tom Dixon, Assemble and Henry Bourne – to each donate a piece of their own work, which are all on show at The Garage space for London Design Festival until 24 September.

In turn, she gifted them with a limited-edition version of one of her signature Spade chairs, which she has cast in aluminium for the occasion.

"Based in the selfsame location where Toogood launched her debut furniture collection in 2010, The Trade Show draws on the centuries-old tradition of artists supporting each other through mutually beneficial barter," said the London designer.

Designer Max Lamb has donated one of his Splatter stools, while conceptual artist Rolf Sachs is presenting his Sisyphus sculpture – which is a spade with a hole cut through the middle.

As well as the numerous products on show, Toogood commissioned a site-specific installation by food designers Arabeschi di Latte, which is based on folk art.

She has also included documents that detail interactions between the exhibiting designers and their new Spade chairs.

"The result is a celebration of the habit of collection, an auto-curated Wunderkammer that showcases pieces from some of the most exciting talents in contemporary British art and design," said Toogood.

"The site-specific installation by food designers Arabeschi di Latte reinterprets folk-art superstitions to bring 'healing energies' to the show, albeit with the spiritual connotations exorcised."

Toogood had an academic training in fine art theory and practice, before moving onto work in the magazine industry.

She employs her formal knowledge of art to experiment with the material and sculptural elements of furniture. She groups her objects together in numbered "assemblages", which allows her to experiment with materials and processes that she is particularly interested in at that time.

The first collection of furniture and lighting in the Assemblage range launched during the London Design Festival in 2010.

For London Design Festival 2015, she collaborated with sister Erica to create an autobiographical "drawing room" filled with furniture, clothing and personal objects at Somerset House.

The same year,  she created The Cloakroom installation at the V&A, which featured 150 oversized foam coats for visitors to wear while following a trail around the museum. 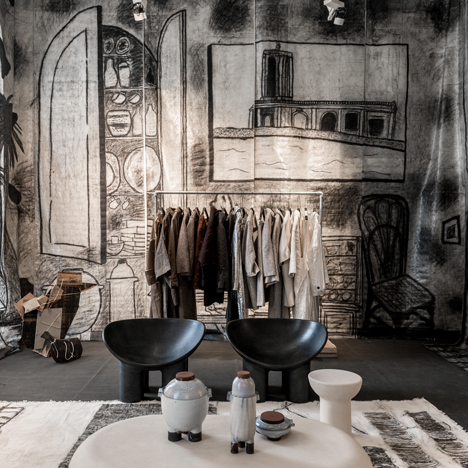