Interior design studio Sides Core placed a black metal arch in the centre of this flower shop, in Kobe, Japan, and it forms a support for lighting fixtures and plants.

The florist specialises in flower arrangements for events, and had created the black arch for a past project. The arch, which rests on a pair of wooden trunks, had been used a climbing frame for a huge display.

Sides Core decided to make it a key feature of the store, by allowing it to divide the space diagonally.

A tree branch was placed on side, so it wraps around the metal, while the long black pendant lights overhead were looped around it. But the florist can also use it to create special displays.

"[The arch] becomes a central element, defining the role of others in the space," they added. "Adding flowers, plants and lighting to the arch creates a space reminiscent of a wisteria trellis."

The walls and exposed ceiling were painted grey, to create a neutral backdrop for the brightly coloured flowers, while the old mottled concrete floor was left exposed.

"It's a space that enhances the constantly changing arrangements and expressions of flowers," added the designers.

The florist can create additional flower arrangements on a pair of plinths made out of concrete panels. These have openings at the back, so that flower baskets can be stored inside when not in use.

The shop counter runs along one side of the space, made of the same panels. Meanwhile, at the back of the store, a half-height partition provides privacy to the workspace behind.

Other furnishings include a circular black table and matching chairs, which are used for consultations with clients.

Sides Core is led by architect duo Sohei Arao and Sumiko Arao, who often create minimalist interior designs. Past projects include a hair salon for just one customer at a time, and another featuring a simple library. 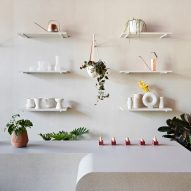