Frida Kahlo graphics and colourful totems feature on these six redesigned versions of Kartell's bestselling Componibili storage unit, which have been created by British designers and artists.

First created in 1967 by Italian designer and Kartell co-founder Anna Castelli Ferrieri, the Componibili is a cylindrical storage unit with sliding panels concealing each of its compartments.

Thanks to its clever use of curved ABS plastic, the piece became an icon of modular furniture design – and to mark its 50th anniversary year, Kartell has been working with a wide variety of designers to reimagine it.

All six were asked to explore the Componibili's versatility. The results were presented at Kartell's Brompton showroom, in an exhibition called Tribute to Componibili: 50th Anniversary, during London Design Festival 2017 – following similar events in Milan and New York.

Lovegrove, an industrial designer, responded with a design that makes the storage unit appear as a tree trunk, while interior designer Ashley Hicks incorporated a totemic sculpture, and switched the cut-out sections on the sliding doors for coral-like shapes.

Campbell-Rey, an interior design studio founded by Duncan Campbell and Charlotte Rey in 2014, created a glossy olive green version with a tray-like top.

Inspired by the works of architects Le Corbusier and Richard Meier, Hickman's design features primary-coloured stripes set upon a white background. When closed, it appears as a regular Componibili – but it is actually a mini bar, with storage for glassware and drinks bottles.

Edward Hall, an artist and interior, ceramics and clothing designer, turned his storage unit into a column reminiscent of Ancient Greek architecture.

Illustrator Angelica Hicks, whose works have featured on a collection of T-shirts for Gucci, wanted to incorporate a "female figure onto an iconic piece of design" – and covered the sliding panels in drawings of Frida Kahlo.

Described by Kartell president Claudio Luti as an "icon of industrial production", Componibili was one of many Kartell products that pioneered the use of plastic in the domestic furniture market.

Over the past year, the brand has worked with numerous designers to reimagine the storage unit, including Patricia Urquiola, Philippe Starck and Ron Arad. Japanese studio Nendo also rethought the product – transforming it into a family of cups, wine bottles and books.

"The anniversary of Componibili by Anna Castelli Ferrieri is a truly special event, that brings with it many meanings, both because it tells the story of the origins and roots of Kartell, and because it has marked an absolute innovation in the history of design, becoming an icon of industrial production," said Luti.

"Componibili are, for me, a family object, they have always been a part of my living, and when I arrived in Kartell, I immediately wanted to give this product an iconic role recognised by the market and the critics of international design who wanted it in all of the museums of the world."

Kartell was founded by Anna Castelli Ferrieri and Giulio Castelli in 1949. Its other famous products include Philippe Starck's Louis Ghost Chair (2002) and Ron Arad's Bookworm bookshelf (1993), while recent launches have seen Tokujin Yoshioka design a plastic table to sparkle like crystal glass and Fabio Novembre create a collection of ultra-minimal doll's houses. 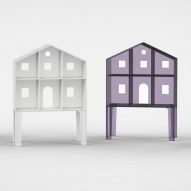