Thomas Heatherwick has suffered his third cancelled project in as many months, with his studio's plans to revamp the David Geffen Hall at New York's Lincoln Center now no longer going ahead.

The Lincoln Center for the Performing Arts and the New York Philharmonic announced they are scrapping London-based Heatherwick Studio and Canadian firm Diamond Schmitt Architects' $500 million redesign of the orchestra's home.

The news follows the cancellation of Heatherwick's Pier 55 scheme, also proposed for the city, and the designer's Garden Bridge for the UK capital.

Reasons why the overhaul for the David Geffen Hall has been dropped are not yet clear, but a joint statement from Lincoln Center and the New York Philharmonic suggests that the proposal to completely gut the concert hall was too drastic.

A replacement project will instead focus on a masterplan that will be completed in phases and won't necessitate that the orchestra hall be closed for long periods of time.

"After a concentrated period of deep review and thoughtful evaluation, Lincoln Center for the Performing Arts and the New York Philharmonic have decided to re-envision the strategy that will steer
the forthcoming renovations of David Geffen Hall," said the statement.

"The two organisations will forgo the original design proposal, and instead move forward with a new masterplan – one that will be ambitious, but will centre primarily on improving audience and artist experiences inside the hall, and will include phased renovations."

While details about the new masterplan are yet to be confirmed, the two organisations said that they are "grateful to the early design team" for teasing out many of the project's logistical and technical issues.

They also outlined key areas of focus, including the reconfiguration of the orchestra hall and improving acoustics, as well as changes to the lobby areas and public spaces.

In the same year, Heatherwick Studio and Diamond Schmitt were picked from 100 firms to replace Foster + Partners on the project. At the time, New York Philharmonic president Matthew VanBesien told the New York Times that he thought "these guys really get this".

The Lincoln Center was developed in the 1960s and is Manhattan's largest performing arts complex. It includes buildings designed by a host of well-known architects, such as Philip Johnson, Eero Saarinen, Pietro Belluschi, Wallace Harrison, and Gordon Bunshaft.

The overhaul of the David Geffen Hall forms part of a wider update of the entire complex, which is being overseen by New York architecture firm Diller Scofidio + Renfro.

Heatherwick, who ranked at number 23 in the inaugural Dezeen Hot List, told Dezeen he was saddened after plans for his Pier 55 "treasure island" for New York's Hudson River were scrapped last month.

In August 2017, his controversial Garden Bridge for London was pulled after mayor Sadiq Khan withdrew his support for the project, following years of debate about its cost. 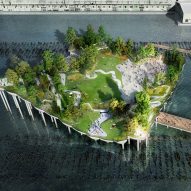