David Connor Design and Kate Darby Architects have transformed a tumbledown cottage in England's West Midlands into a home and studio, enveloping the ruined old structure in a shell of black corrugated metal.

David Connor and Kate Darby set about preserving the 300-year-old timbers, erecting a new steel frame over the listed ruins and cladding it in blackened corrugated iron to protect it from further weathering.

The new structure extends to encompass a small stable that would have stood at one end of the cottage, which now houses a studio for the pair.

A small gabled entrance has also been affixed to one flank of the building and clad uniformly in sheets of the same corrugated cladding.

Inside, the old warped timber structure, bound by dead ivy and covered in part by flaking plasterwork, has been left completely exposed. It is framed by a tall window in the gable adjoining the studio.

"The strategy was not to renovate or repair the 300-year-old listed building, but to preserve it perfectly," explained Connor and Darby. "This would include the rotten timbers, the dead ivy, the old birds nests, the cobwebs and the existing dust."

"The ruin would be protected from the elements within a new high performance outer envelope. This means that in most places there would be two walls, two windows and two roofs, old and new."

The ground floor has become a double-height studio for Connor and Darby. To the rear, an entrance hall doubling as a dining room links a kitchen and lounge, while a bedroom and bathroom are set overhead.

The layout is intended to allow for easily adaption later into a house with three bedrooms and two bathrooms.

The smooth, white plastered walls of the new interior provide a neutral backdrop that lets the ageing timbers take centre stage. Similarly, unfussy metalwork forms a staircase linking the lower and upper storey, and forms a balustrade in the bedroom.

Metal supports protrude at points through the smoothly plastered ceiling to support the rafters. And in the kitchen, metalwork and simple forms are deployed to offer contrast to the bowed timber ceiling, and the bare plank and blockwork walls.

Triple-glazed windows help keep the building well insulated and air tight, and the spaces are heated by a pair of wood-burning stoves. The occupants forage in the adjacent forest to find fuel for these.

Solar panels are mounted on the south-facing roof to supply the building with electricity, while coiled below the roofing is 100 metres of piping filled with glycol – a heat-transferring fluid used to heat water during the summer.

Last year, British studio Moxon carried out the renovation of another 18th-century farmhouse in the Scottish Highlands, adding a larch and corrugated-metal extension.

Also using a crumbling structure as the framework for a new metal-clad building, London studio Haworth Tompkins inserted a Corten steel artist's studio within the walls of a ruined Victorian dovecote in Suffolk.

Photography is by James Morris unless otherwise stated. 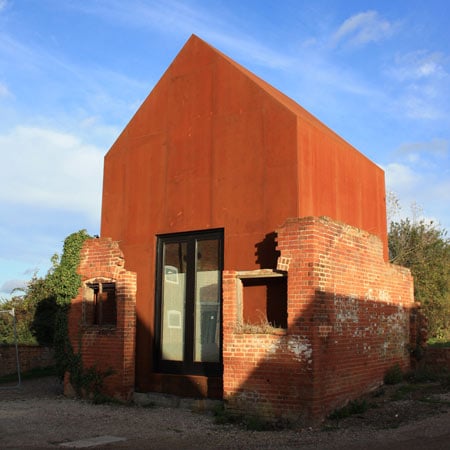 The Dovecote Studio by Haworth Tompkins