The vertical wooden planks were inspired by the traditional cladding on Gothenburg's buildings, while the blackened wood was inspired by the cabins that stud Sweden's archipelagos.

"We wanted to have something that felt very much rooted in its Scandinavian location," said Jaki Amos, half of the husband-and-wife team behind Amos and Amos told Dezeen.

"It was [about] fusing those two together, that historical Gothenburg architectural style then bringing in the black timber to toughen it up and make it a lot more contemporary," the designer explained.

Jaki and Darryl Amos had previously worked with the digital agency for a couple of temporary spaces in London before designing their headquarters in Clerkenwell.

"The big thing about AKQA is that their phenomenal attention to detail," said Amos. "We're kindred spirits because we are very detail-orientated.

"It makes for a nice collaboration when you work with someone like that."

The former shipbuilding warehouse in the Lindholmen docklands had been previously converted into offices, but Amos and Amos stripped it out completely before creating the office space within the original footprint.

"We really felt that dividing it back into smaller areas would have lessened the impact of this monumental space that you walk into," said Amos.

"Whilst we introduced some elements into the space, such as the big black bulkheads with the Crittall glazing below, overall the theory was to keep the space as open as it could be and instead have zones within that for collaborative workspaces," she added.

Having already created their London space for them, Amos and Amos were aware that AKQA needed a flexible office that could accommodate a variety of work styles.

AKQA also co-host teams from their clients, such as Volvo, for several days each week, so required a set up with flexible desk spaces.

Behind a custom-cast concrete reception desk, a central open-plan office floor has desks available for guests, as well as a cafe, presentation theatre and communal workbenches made from white oak.

Along the periphery, oak-clad meeting rooms sit under the bulkheads, with large Crittall windows connecting the spaces off from the rest of the office.

For times when teams need to sequester themselves to work intensively on a pitch or project for weeks at a time they can retreat to the "war rooms", whose mono-pitched roofs were also inspired by the "geometric and monolithic" island cabins.

"We liked the idea of bringing one of those in and introducing that mono-pitch within the space so that you are not constantly trying to build into the space," Amos said.

"It's such a vast structure you can't really start to build against the walls or up to the ceiling without taking away from it. It was all about independent insertions into the floor plates."

A staff dining area with long tables for the entire office to eat together was inspired by research trips to other Swedish offices.

"We realised that in Sweden there are a lot more cultural elements in the way people work together in their offices. Communal dining is a huge thing," Amos said.

The office furniture was also sourced from Scandinavian designers including Bensen, Gubi and and Rubn, and design classics such as Carl Hansen's CH24 Wishbone Chairs.

"AKQA's architectural philosophy has always been to design spaces that elevate the spirit, inspired with local culture, modernity, sustainability and intelligence."

The Gothenburg studio is AKQA's 21st opening, joining offices in cities around the world including in San Francisco, New York, Paris, Milan, and Melbourne.

For their Tokyo offices Japanese studio Torafu Architects created another collaborative work environment with a basketball court for staff to play together on during their breaks. 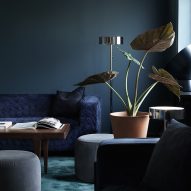