Architecture firm Snøhetta has revealed plans to build a restaurant in southern Norway that will be partly submerged in the sea to give diners a glimpse below the waves.

Described by the Oslo- and New York-based firm as "Europe's first underwater restaurant", the building will comprise a rugged concrete box with half of its body on the coastline, and the other half sunken underwater.

Its primary use will be as a restaurant for up to 100 people, but it will also function as an marine research centre and as an artificial mussel reef.

Once inside, visitors will be able to look through a huge panoramic window to observe sea life at first hand.

"More than an aquarium, the structure will become a part of its marine environment, coming to rest directly on the sea bed five meters below the water's surface" said Snøhetta.

"Like a sunken periscope, the restaurant's massive acrylic windows offer a view of the seabed as it changes throughout the seasons and varying weather conditions."

The building will be called Under – a word that the architects say is very similar to "wonder", when translated into Norwegian. It will be built near the village of Båly in Norway's Lindesnes region, on the country's southernmost tip.

The building's concrete walls will be a metre thick, helping to withstand its inhospitable environment. Externally, this concrete will have a coarse texture, to encourage mussels to attach themselves to the structure.

"Over time, as the mollusk community densifies, the submerged monolith will become an artificial mussel reef that functions dually to rinse the sea and naturally attract more marine life to its purified waters," said the design team.

Meanwhile, the marine research centre inside will facilitate studies into fish behaviour – specifically whether it is possible to train wild fish with sound signals, and also whether fish act differently in different seasons.

A huge frame-like oak wall will provide the building's entrance, which will lead through to a wood-lined restaurant space.

"On a day of rough sea, you can feel a hint of fresh, salty ocean spray against your face as you enter the restaurant," said the architects.

The dining room will be painted in deep blue and green hues "inspired by the seabed, seaweed and rough sea". There will also be a champagne bar, featuring more subdued tones, intended to evoke shells, rocks and sand.

Snøhetta is led by architects Craig Dykers and Kjetil Trædal Thorsen. The firm has designed a number of waterside buildings, most famously the Oslo Opera House, as well as a hotel for Norway's Lofoten archipelago and a boathouse for a summer camp.

However Under will be the studio's foray into underwater architecture. Other examples of this challenging type of project include a submerged hotel suite in the Zanzibar archipelago and a Philippe Starck-designed wine cellar with one underwater storey. 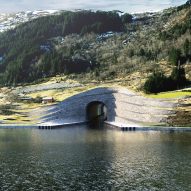