A courtyard brings light into the centre of this board-marked concrete house in Argentina's Buenos Aires province, designed by architects Anibal Bizzotto and Diego Cherbenco.

Built for a young family, House in La Comarca is located in a growing gated community in Tigre – a town to the north of Buenos Aires city.

Residences in the area must adhere to plot boundaries and leave plenty of space between neighbours, but Bizzotto and Cherbenco said this has resulted in houses with "compact shapes" and little relationship to the outdoors. The architects hoped avoid this with their project.

"We focused on setting our house apart," the duo said. "Our project incorporates the use of open space in everyday life throughout the seasons, by placing big openings and entrances that establish visual continuity and provide optimal ventilation."

Narrow windows puncture the southern side of the two-storey residence to maintain the privacy of the residents. Meanwhile, a large expanse of glass fronts the upper floor, which cantilevers over the home's entrance. The architects also created a yard that opens onto the garden on the northern side.

In order to make six-metre-high opening in the centre of the house, the architects employed the concrete structure. The walls are imprinted with the texture of the vertical pine planks used as formwork.

This technique, which offers a rugged appearance, has been used for a number of other residences in Buenos Aires, like Luciano Kruk's series of holiday homes.

"Material and structure are thought out as one, and the use of concrete as vertical boards presents the house with a distinct visual identity," said Bizzotto and Cherbenco. "Concrete requires little maintenance and with the pass of time the house will gain an iconic status in it's visuals."

Glazing forms the inner two-storey-high walls that wrap the courtyard, to offer views and plenty of light to the spaces inside. A tree that grows from a small square cut into the floor is intended to provide shade during the sunnier months.

Travertine stone is laid across the floor of the yard to complement the exposed concrete. The stone continues inside the residence on the ground floor, where a double-height living room abuts the yard.

The open-plan kitchen and dining room is set to the rear of the lounge, while a perpendicular staircase leads to the first floor.

On this level, a walkway with wooden floor boards has a black handrail that matches the window frames. The runs past the void links the bedrooms placed on either side, including the master bedroom is set to the front and a pair of children's bedrooms at the rear. The hallway also contains a study nook.

Buenos Aires is Argentina's largest province and home to its capital city of the same name. Other residences recently completed in the area include a concrete-clad home by Dieguez Fridman and a residence by Bam! Arquitectura with a garden ramped up the centre. 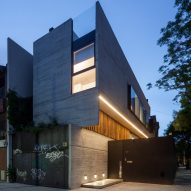 Photography is by Albano García.