In this exclusive movie Dezeen filmed for Samsung at London Design Festival, the brand explains how its new Yves Behar-designed television aims to make discovering and collecting art more accessible.

The Frame television was designed by Behar to look indistinguishable from a framed artwork.

The device features an online store, which allows users to browse and purchase artworks to display on the screen when they are not watching TV.

Sarah Nelson, who leads content development for The Frame, believes the new device and accompanying service will encourage users to buy artworks for their home digitally, much like they pay to download films or TV shows.

"The Frame is both a 4K smart TV and a digital canvas," she says in the movie, which Dezeen filmed at Samsung's The Frame installation at London Design Festival last month.

"We think that by providing a really simple and affordable way for people to collect art, we can potentially make buying and collecting art as common as it is to purchase a TV show or listen to your favourite album."

Users can choose from 100 free artworks that come pre-loaded on The Frame, or pay to download additional pieces from a range of different art galleries and dealers such as Albertina, the Museo del Prado, Lumas and Saatchi Art. 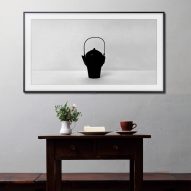 A subscription model is also available, which enables users to download multiple pieces of art for a monthly fee to display on The Frame.

"When the Frame is not in use, it shows a piece of art instead of fading to a black blank screen. Traditionally, artworks are displayed in art galleries or museums, but The Frame gives you access to art at home in your room."

For London Design Festival, Samsung teamed up with online art gallery Saatchi Art to create a gallery space at the Old Truman Brewery on Brick Lane showcasing artworks displayed on The Frame, alongside traditional paintings on canvas by a selection of London-based artists.

"We are trying to show how The Frame, with its digital display of artworks, can be hung alongside any other artworks you might have in your home," says Saatchi Art chief curator Rebecca Wilson.

"I chose six artists, based in London. They are making paintings with texture and detail. I wanted to see how that would look displayed next to The Frame."

The installation also included a pop-up shop alongside the gallery, where visitors could try out The Frame and place orders, while a series of talks hosted in the space throughout London Design Festival explored what impact digital technologies such as The Frame are having on the art market.

Wilson believes that by making art more accessible to more people, digital technology is providing artists with a new audience that didn't exist before.

"There are all sorts of possibilities that can come out of saying yes to new things," she says. "There used to be this feeling that as an artist you had to be cloistered away in your studio waiting for a gallery to knock on your door. If you are prepared to embrace technology, it doesn't have to be that way anymore."

This movie was filmed by Dezeen for Samsung in London. Additional video footage and still photography is courtesy of Samsung. 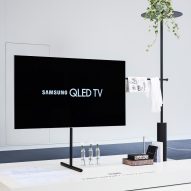