A frameless glass roof panel connects with a window to allow natural light to flood this extension added to the rear of a Victorian house in east London by The D*Haus Company.

The house is located on Columbia Road, which hosts a famous weekly flower market in the London Borough of Tower Hamlets.

Local studio The D*Haus Company was tasked with upgrading the existing ground floor and adding an extension that makes optimal use of the available space and light at the rear of the property.

The reconfigured spaces accommodate an open-plan kitchen, living and dining area, which extends outwards into an yard bounded on one side by a curved brick wall that separates the house from the street.

The clients stipulated that intrusions into the courtyard should be minimised, but a void between the end wall and the boundary wall that had previously been used to house a bike shed and barbecue was incorporated into the plan.

"By knocking through the rear wall and taking the floor to the extent of the site, we maximised floor area and created a portal to the sky," said the studio.

The process got off to a difficult start, when early excavations revealed a old bakery oven almost as large as the existing yard. This had to be covered and made structurally sound using a reinforced concrete slab.

The existing floor was levelled off to create a single level across the entire ground floor, which helps the to enhance the sense of space.

A polished-concrete floor was added to provide a seamless surface that extends through the interior and into the courtyard.

The continuity of the flooring helps to minimise the threshold between the indoor and outdoor spaces, which can be connected to form a single room by opening the huge pivoting steel-framed door.

A large steel beam was installed to allow an existing kitchen wall to be removed. This creates space for a dining table big enough to seat eight people beneath a skylight set into the ceiling.

"These tectonic openings in the mass play and react with one and another and let the sun stream in," the architects added.

The new kitchen extends all the way to the edge of the site and follows the curve of the boundary wall.

The former void is filled in with frameless self-cleaning glazing that extends vertically and across the roof to enhance the connection with the outdoors and the sky.

Marble countertops introduce a natural detail to this space, while another window behind the sink looks directly out onto the courtyard.

The rest of the interior features white surfaces that provide a neutral backdrop and focus attention on the textures of the floor and the brick walls surrounding the courtyard.

The D*Haus Company is an experimental multidisciplinary practice founded by Daniel Woolfson and David Ben Grunberg, which applies mathematical principles to architecture, furniture and lighting design.

The studio is best known for designing a shape-shifting house called the Dynamic D*Haus, which features angular sections that open and close in response to the time of day, seasons and weather conditions.

It has also developed a table based on the same formula for changing the shape of a square into an equilateral triangle. 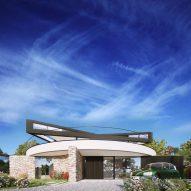 The D*Haus Company unveils Devon house with a swivelling top