The spherical, weighted base of this floor lamp by Australian designer Nick Rennie stops it from falling over if pushed or knocked.

Rennie created the Sway floor lamp for Australian brand Made By Pen. The brief called for a cordless light that could be placed anywhere in a room, but Rennie wanted to also create an object that interacted with its surroundings.

The designer, who is based in Melbourne, came up with a lamp made from two spherical forms joined by a thin pole.

The bottom sphere is weighted, allowing the lamp to sway side to side when pushed, and preventing it from falling over.

"Having a strong understanding of production processes, as well as a keen knowledge of technology, Nick set about designing a floor lamp that not only fit the brief, but challenged pre-conceived perceptions of what a floor lamp should look like and how it interacted with its users," said Made By Pen.

"The result is a minimalist, nomadic floor lamp that is playful and could not be knocked over."

The LEDs concealed within the shade are powered by a battery, and the lamp can be plugged into a power point when it needs to be charged.

To turn it on, the user simply taps the rod or the head.

Made By Pen was founded by Michael Mabuti and Susan Chung. Their vision was for a brand that creates opportunities for established and emerging Australian designers, by helping them bring products to the market. 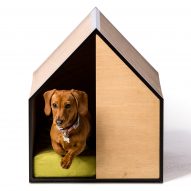 Made by Pen launches The Dog Room with architect Michael Ong

Last year, they teamed up with architect Michael Ong to create a miniature wooden house for dogs, to fill a gap in the market for "designer dog kennels".