New York's Metropolitan Museum of Art will draw connections between religious art and contemporary couture for its next major fashion exhibition, to be designed by architecture firm Diller Scofidio + Renfro.

Heavenly Bodies: Fashion and the Catholic Imagination will be a joint between The Met's Fifth Avenue location and The Met Cloisters – the museum's satellite location at the northern tip of Manhattan, which exhibits medieval art.

The exhibition will trace the history of garments depicted in Catholic art, and reveal how some of today's biggest designers have been influenced by the imagery and ideas presented in centuries of ecclesiastical artefacts.

The Costume Institute, based at the museum, is partnering with The Met's Department of Medieval Art to organise the show.

"Fashion and religion have long been intertwined, mutually inspiring and informing one another," said Costume Institute curator Andrew Bolton. "Although this relationship has been complex and sometimes contested, it has produced some of the most inventive and innovative creations in the history of fashion."

For the show, a collection of papal robes and accessories will travel from The Vatican for display in the Anna Wintour Costume Center. The garments, rings and tiaras date from the 18th to early 20th century – spanning 15 papacies – and will be shown alongside 50 artworks from the sacristy of the Sistine Chapel.

In The Met's medieval galleries and at The Met Cloisters, 150 ensembles from the past century will be presented among the historic artworks. Outfits by names including Azzedine Alaïa, Cristobal Balenciaga, John Galliano, Jean Paul Gaultier, Karl Lagerfeld, Raf Simons and Vivienne Westwood will all feature.

New York-based Diller Scofidio + Renfro will collaborate with the museum's design department on the exhibition display, following the firm's work on the institution's Charles James exhibition in 2014.

Heavenly Bodies will run from 10 May to 8 October 2018. The opening will follow the annual Met Gala fundraiser, which has become one of the most eagerly anticipated events on the fashion calendar.

Last year's spring exhibition was dedicated to the work of Comme des Garcons founder Rei Kawakubo, while the previous two shows have focussed on the relationship between fashion and technology, and the industry's obsession with Chinese art and design. 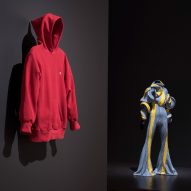