The Shohei Shigematsu-led OMA New York office has used translucent scrim to create a "ghost cathedral" for this year's Costume Institute exhibition at the Metropolitan Museum of Art, which focuses on the convergence of fashion and technology (+ movie).

Sponsored by Apple and curated by Andrew Bolton, the exhibition features more than 170 garments that demonstrate ways in which the hand (manus) and machine (machina) are used together to create both haute couture (high fashion) and prêt-à-porter (ready-to-wear) designs.

"Manus x Machina questions the dialectical relationship in which the hand and machine are portrayed as discordant instruments in the production of the haute couture and pret-a-porter," said Bolton.

"Instead of presenting the handmade and the machine made as oppositional, it suggests a spectrum of practice whereby the hand and machine are equal protagonists in solving design problems, enhancing design practices and ultimately advancing the future of fashion."

OMA New York, which Japanese architect Shohei Shigematsu has headed since 2008, has transformed what was previously an underused hallway into the exhibition space using scaffolding wrapped with a white perforated PVC fabric.

"We had to create a whole environment, so what we did was to create this translucent ghost cathedral," Shigematsu told Dezeen. 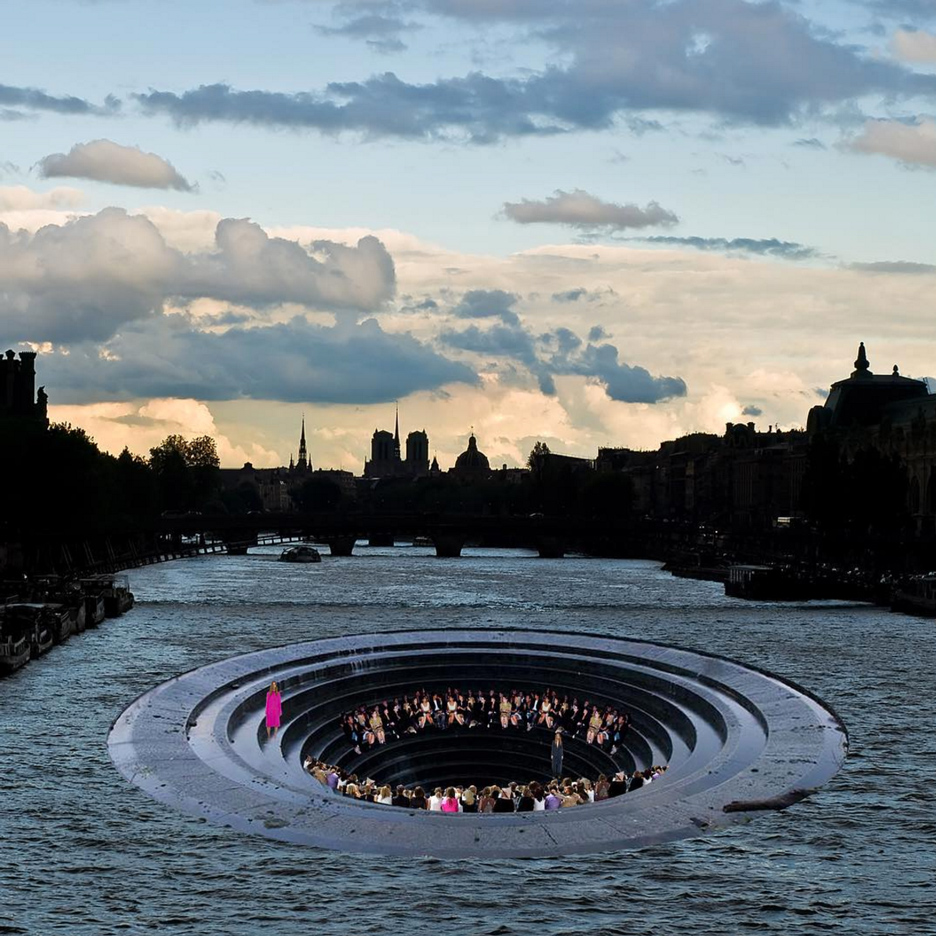 The classical architectural shapes were designed to be in keeping with the museum's existing architecture, while materials provide a neutral space that would allow visitors to appreciate the details of the intricate garments.

Arranged over two floors, the exhibition showcases examples of 3D printing, laser cutting and other machine-based fabrication combined with work completed by hand.

Upon entering the space on the upper level, visitors are greeted by the 20-foot (six-metre) train of a 2014 wedding ensemble by German designer Karl Lagerfeld. The centrepiece outfit was created using a combination of digital pattern modelling, hand stitching and machine sewing.

Lagerfeld's dress sits beneath OMA's giant central structure, where the golden embroidery patterns are recreated as projections on the dome.

"We always had this concern that fashion exhibitions tend to really rely on flat screens and media, because that's where you see movement," said Shigematsu, whose current projects include a major art museum extension in Quebec. "So we really wanted to integrate the media into the architecture."

Four poches around the outside of the cocoon-like vestibule also feature projections of details from the garments displayed within them, including Yves Saint Laurent's 1958 L'Eléphant Blanc evening dress from his first collection for Dior.

The exhibition is split into six main areas based on sections from 18th-century French philosopher Denis Diderot's Encyclopédie, which categorised art and craft disciplines alongside sciences.

On the upper level, these are broderie (embroidery), plumasserie (featherwork) and parurier floral (artificial flowers).

Along with Lagerfeld's wedding dress and Saint Laurent's L'Eléphant Blanc, embroidery examples include metallic designs by Louis Vuitton from Spring Summer 2016, and a 2012 dress covered in shells and coral by Sarah Burton for Alexander McQueen.

Among the floral gowns is Hussein Chalayan's Kaikoku Floating Dress. The remote-controlled fibreglass case is painted gold and hung with crystal and paper "pollens", which release into the air.

There's also a room dedicated to tailleur et flou (tailors and dressmakers), in which highlights include a collection of pieces by Chanel.

"Our intention is to liberate the handmade and the machine made from their usual confines of the haute couture and prêt-à-porter, and release them into the hands of fashion designers, to whom they serve as expressions of creative impulses rather than the exigencies of fashion," said Bolton.

Manus x Machina is open to the public from 5 May to 14 August 2016. It is the latest in a series of fashion exhibitions themed around technology, following Techstyle at the Museum of Fine Arts, Boston, and Coded Couture at the Pratt Manhattan Gallery.

Photography is by Brett Beyer, unless otherwise stated.