Austrian product designer Klemens Schillinger has created a lamp that only lights up once the user is willing to surrender their smartphone.

Based on the saying "out of sight, out of mind," Schillinger's Offline lamp urges users to direct their attention away from their mobile phones and towards more worthwhile activities, like reading or working.

Although the lamp appears as a standard household light, it features a drawer integrated into its pedestal that requires a smartphone to be placed inside it in order to turn on.

"The drawer is like a magical chest that requests a small object like a smartphone to be put inside," said the Vienna-based designer.

"When you give something, you get something in return. In this case, you trade the often uncontrollable urge to check for new messages for a bit of light that invites you to read a book instead, or just focus on your work."

The light acts as a "reward" in exchange for the user putting their phone away, rather than just placing it in an ordinary drawer or box, Schillinger told Dezeen.

Shaped specifically to fit all standard smartphones, the drawer recognises the weight of the object placed inside. Once it has been shut with the smartphone inside, the switch is triggered and the light turns on.

The designer also said that he found inspiration for the project from hotel key cards, which turn on the electricity in hotel rooms once they are entered in a slot near the entrance.

The brass handle and blue interior of the drawer were chosen to give the base the appearance of a magical chest, Schillinger told Dezeen.

The designer then juxtaposed this with a 3D-printed lamp shade, which is intended to give the light a more minimal and modern look.

The base of the lamp has been made using a two millimetre-thick sheet of steel, which gives the lamp more weight while also limiting the phone's reception when inside the drawer.

The adjustable lampshade has been 3D-printed using white polyamide, which allows the light to shine through, but is translucent enough to emit a soft, warm glow.

3D-printed homeware brand Othr has also designed a product that discourages the use of digital devices. The company's analogue calendar aims to divert attention "away from the screen and into the physical world".

Photography is by Leonhard Hilzensauer. 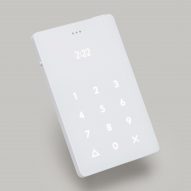