Californian studio Brooks + Scarpa has shaped the roof of this art museum in Utah to create deep valleys and a huge curved porch, as a reference to the sandstone formations of nearby canyons.

The 28,000-square-foot (2,601-square-metre) museum occupies the southwest corner of the site, complimenting the other facilities for visual and performing arts, live theatre and arts education.

Brooks + Scarpa's design takes cues from the impressive natural landscape that surrounds the university, which is located near to popular reserves in Southern Utah: the Bryce Canyon National Park and Zion National Park.

A pair of indentations form steep cavities in the museum's roof, resembling those found in the red cliffs of the reserves. The roof then parts in two and is curved on the underside to form a grand canopy above a public plaza.

"Inspired by the dramatic sandstone formations at nearby Bryce Canyon and Mount Zion National Park, the building's main architectural feature is the canyon-like roof that covers the entire building, as well as an additional 6,000 square feet of exterior under roof event space," said Brooks + Scarpa.

Reaching 120 feet (36.5 metres) high on the western side, the roof cantilevers over the entranceway into the museum, resting on chunky columns with rounded edges.

Covered in exposed concrete panels, these columns could be likened to weathered stone. The exterior walls are clad in pale panels bearing a rippling texture, which mimic striations found in sandstone.

The roof partially shades the museum's tall glazed walls on both the northern and southern side of the building. At the rear, it folds back up to allow views from inside to the crimson-toned mountains of The Red Hill in the distance.

As well as offering aesthetic value, the roof's valleys are designed to catch and drain snow and rain that fall during the winter. The rainwater is collected and stored in an underground basin.

"Stormwater and snow melt can be seen from the street running off the roof and down the building facade, then disappearing into concealed wells at base of the structure, where it is collected and re-charged back into the aquifer," said the architects.

The single-storey museum hosts a special exhibition of work by Utah artist Jim Jones, and pieces by the university's arts students. Visual artwork produced in the local area and the surrounding Colorado Plateau – a desert region straddling Utah, Arizona, Colorado and New Mexico – will also form part of the programme.

The building's layout is kept simple, and most of the area is occupied by a large open-plan exhibition space. It is fronted by a reception desk, lined in slanted wooden panels that match those covering the floor.

Temporary and moveable walls are used to adapt the space, and are fitted with artificial lighting to complement the natural light that enters the gallery from the southern side.

By incorporating the artificial lighting into temporary elements, Brooks + Scarpa hopes to reduce the museum's energy demand. The firm has also included a combined system for cooling, heat and power to work to this effect.

Additional meeting rooms, offices and classrooms of varying sizes are arranged along the northern and eastern walls.

Outside, parks and sculpture gardens slot in between The Engelstad Shakespeare Theatre, The Randall L Jones Theatre, The Eileen and Allen Anes Studio Theatre, and The Festival's Artistic and Production Facility that make up the rest of the campus masterplan.

These outdoor areas, which feature native planting, are intended to host up to 300 people for live performances in Utah's warmer weather.

Among the firm's recent projects are a low-cost housing development in Los Angeles built to accommodate displaced service members, and an Aesop store interior covered in recycled cardboard tubes. 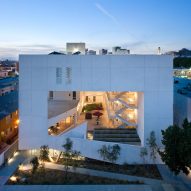