This art museum is located on the outskirts of Jingdezhen, a city famed for its porcelain production, so architecture studio DL Atelier chose to use the local clay-heavy earth for its walls.

Sanbaopeng Art Museum was designed by DL Atelier for a site in Sanbao village, on the outskirts of the so-called "porcelain capital". It is a place where many porcelain artists have established studios over the past decade.

The village already hosts a concentration of artists and exhibition spaces, so the studio set out to create a unique environment that uses architecture to evoke the intense relationship between the makers and the material.

"At the very beginning, my interests were more focused on telling stories between artists and their creations than just designing a 'me-too' museum," said DL Atelier principal Liu Yang.

The studio drew inspiration from the porcelain-making process, where the outcomes of firing the material in a kiln can be difficult to predict and result in imperfections that add to the character of the pieces.

This "romantic relationship" between the maker and their artworks informed the design of a building that seeks to achieve a similar sense of mystery and unpredictability in its layout and materiality.

Locally sourced clay was used to create rammed-earth walls. Designed to appear to emerge from the earth, introduce a textural detail to the building that the architects hoped "could offer a poetic feeling".

The museum features a linear plan, with a group of rectilinear volumes protruding above four-metre-high walls that stretch 150 metres along a valley floor.

The rigorous geometric forms accentuate the contrast between the manmade structure and its natural surroundings, where streams cut through the forests and meander across the valley.

The outer walls flank an open central passage that extends 100 metres and is divided only by glazed surfaces, lending it a transparency that contrasts with the solidity of the earth on either side.

A cantilevered canopy draws visitors towards an entrance at one end of the building, which is surrounded by trees and located close to a stream.

Rather than being laid out as a linear sequence of rooms, the museum's spaces are staggered and arranged across different levels so visitors can choose their own route though the building.

"Multiple choices are provided in the museum," the studio added. "Visitors can go up and down, feel the delightful stream or peaceful pond, enjoy the exhibition or relax in the corner."

"Every tour will be a story between visitors and the architecture, a mixture of discovery, expectation, waiting, anxiety, disappointment and joy."

Several of the areas are separated by still reflecting ponds. The route from the entrance to the first-floor reception area involves traversing a pond using a set of stepping stones that connect with a travertine staircase.

The water extends throughout the building and is visible through the full-height glazed surfaces. More stepping stones form a path that connects with a staircase leading up to a gallery space.

The protruding upper levels and elements such as the entrance canopy are clad in titanium-zinc panels which, like the earth and travertine stone, was chosen to improve with age as it develops a natural patina. 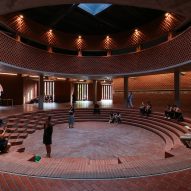 Photography is by Sun Haiting.