It took a village to build this barn for livestock in British Columbia, which Canadian architect Asher deGroot of Motiv Architects designed for his parents' farm.

To construct Swallowfield Barn, the architect's parents Dennis and Jenny deGroot undertook most of the labour themselves to cut costs, with the help of 60 volunteers.

The agricultural building was constructed in the traditional style of rearing, or barn-raising, in North America, in which the structure is built by members of the local community.

"The goal of the project was to build a new barn and gathering space in the manner of traditional barn-raisings, using simple techniques and readily available materials," said the architect, who co-founded Motiv Architects in Vancouver.

The barn has a distinct off-kilter pitched roof made from laminated veneer lumber moment frames, and designed in collaboration with wood engineer Eric Karsh at Equilibrium. Inside, the barn's "cathedral-like design" is achieved by closely spaced beams and ample natural light.

A timber archway in a garden across the way outlines the barn's angular profile, and creates a processional effect up the grassy path to the entrance.

The front and back of the building are clad in vertically laid, reclaimed Douglas fir boards that was previously used as formwork for casting concrete. A couple of narrow windows on the timber-clad front and back sides help to bring light into the space.

The ground floor is spacious, with multiple entry ways and alleys designed for moving farming equipment and animals. "It is, after all, a simple barn designed for simple inhabitants – resident cattle, swine, fowl, cats, and barn owls," said deGroot.

A lofted portion above features the exposed timber ceiling constructed from laminated beams. "The jewel of the project is a hayloft and community hall situated above the ground floor areas, and accessed through the workshop," said deGroot.

Swallowfield Barn is based in Langley, a town near to the border with US state Washington. Other agricultural buildings in this region include an angular wooden headquarters for the Washington Fruit and Produce Company by Graham Baba Architects and a metal-clad winery with a gravity-flow design by Olson Kundig – both of which have low-lying angles to integrate with the mountainous landscape. 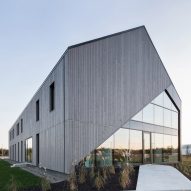