This award-winning prototype house developed for a Chinese village destroyed by earthquake could protect millions of people around the world, claims architecture professor Edward Ng in this movie Dezeen filmed at World Architecture Festival 2017.

The rammed-earth house was designed by the Chinese University of Hong Kong (CUHK) and a team of seismic design experts at the University of Cambridge. The construction techniques developed through the prototype aim to help the residents of Guangming Village in Zhaotong rebuild their homes following the Ludian earthquake in 2014.

Speaking exclusively to Dezeen after the project was named World Building of the Year at the World Architecture Festival 2017, CUHK professor Ng claims the anti-seismic construction method used to build the house could help people all over the world.

"Earthquakes are not a Chinese problem, they're a worldwide problem," he says in the movie, which Dezeen filmed at the World Architecture Festival 2017 in Berlin.

"A lot of people live in mud houses. So if you can find a way to help these people by designing a safer structure for them then we are solving a problem for maybe 100 million people."

The house was developed for an elderly couple in Guangming Village using construction methods that could be taught to other residents to rebuild their homes affordably using locally available materials.

Most of the village was originally built using rammed earth. The residents had attempted to reconstruct it using more earthquake-resistant materials such as brick and concrete, but the price of these materials proved unaffordable and construction came to a halt.

So Ng and his team sought to find a method of constructing houses using the traditional rammed-earth technique, which would be far more resistant to seismic activity.

"I think it's more than just a house that we were trying to work on. It is a prototype that allow us to solve many other problems in many parts of the world. Now we have a workable prototype that we can disseminate," says Ng.

The house is a square structure with a pyramid shaped roof, which Ng says is a stable structure that is easy to construct.

"It is a very simple house. It has to be simple because villagers have to know how to build it," he added.

"For seismic resistance design it is important that the geometry is simple. A square form is always stronger so we started our design with a square block. The roof is also a very simple pyramid structure."

Researchers from CUHK worked to improve the quality of the earth used in the construction in order to enhance its resistance.

"Together with our seismic design expert we started to improve the earth mixture they had on site. We applied some scientific principles to it so that it is stronger and more workable," Ng tells Dezeen.

Window openings in the building are reinforced with concrete frames to keep the windows intact in the case of an earthquake.

"Every time you form an opening in an earth wall you weaken it, so for big windows like ours we had to surround it with a structure so that the wall became integral," says Ng.

"The window frame is made of concrete so that when the wall shakes the concrete will hold the window intact."

The square structure was divided into two blocks separated by a central atrium space flooded with natural light from above, which remains cool in the summer and warm in the winter due to the high thermal mass of the rammed-earth walls.

Dezeen was media partners for the World Architecture Festival 2017, which this year took place in Berlin in conjunction with Inside festival of interior design. We will be publishing more videos about the winning projects in the coming weeks.

Last year the World Building of the Year award went to the National Museum in Szczecin by Robert Konieczny of KWK Prome, which features a public square on its slightly sloping roof. 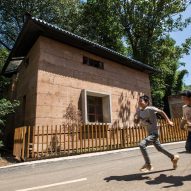