Dezeen has won another award for digital journalism, with judges praising the brand's "global ambition and constant innovation".

Judges at the International Building Press Awards, held in London on 30 November, described Dezeen as the "clear winner" in the category.

"Dezeen clearly demonstrates its global ambition, constant innovation and a continuing commitment to new ideas even after 10 years," they said.

"This is reflected in stunning figures and a deserved reputation for high standards."

Dezeen founder and editor-in-chief Marcus Fairs was also praised in the multimedia category, in which he was shortlisted.

"The breathtaking array of new ideas and the sustained energy of Marcus Fairs has made Dezeen part of the community," the judges wrote. "The achievement lies in bringing everybody with him and creating a real buzz around the site."

The Digital Service of the Year award is the third accolade for Dezeen this year. This summer it won in the Editorial Team of the Year and the Best Use of Video categories at the Association of Online Publishers Awards.

Last month Dezeen editor Amy Frearson was highly commended in the Specialist Editor of the Year category at the British Society of Magazine Editors awards. 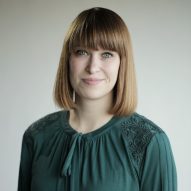