A door carved with cartoon aquatic creatures, a bronze oatmeal bowl, and a spherical room for peace and quiet are among US editor Dan Howarth's pick of the best items shown at last week's Design Miami fair.

A furniture suite by Swiss-born Albert Frey – synonymous with the desert modernism of Palms Springs – was exhibited for the first time by Converso. The whitewashed pine designs came from the home of the architect's longtime lover Elise Wolfe, along with Frey's stainless steel drafting desk.

After a eureka moment during one breakfast, creative entrepreneur Liz Swig embarked on a mission to elevate humble oatmeal. She enlisted the help of Brazilian designers Humberto and Fernando Campana to create a bronze bowl for serving the dish in, which has tiny animal figures spilling from its side "like vomit".

Door Than This by The Haas Brothers
R & Company

It took over a year to hand-carve the black walnut door shown by The Haas Brothers, which featured relief imagery of walruses on one side and octopuses on the other, after the titles of two songs by The Beatles. The LA-based artist duo also cheekily created and positioned a brass door handle to look like a walrus penis.

Galerie Kreo dedicated its entire booth to French designers Ronan and Erwan Bouroullec, featuring collectible pieces by the brothers that included their Chains of glossy ceramic bells that hand from the ceiling. Giant rhomboid vases, a soft-edged table and plant-like lighting were among other items displayed.

Designers Fien Muller and Hannes Van Severen created an exact replica of the living room at their home in Ghent at the fair. The project for Airbnb involved shipping their possessions across the Atlantic and reinstalling them in an identical layout, with features recreated down to the light switches.

French architect Maurice-Claude Vidli's Isolation Sphere is designed for escaping from the world. The spherical room is composed of four lacquered polyester shells that drown out noise, and fitted with storage, electrical power and a radio for its occupant to use in peace.

Sculptor Tom Sachs ventured into industrialised production for his latest collection, which was made by robotic milling machines. The plywood designs include two side chairs, a lounge chair and several tables – with circles cut from their structural panels. 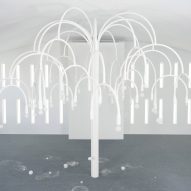 Studio Swine brings New Springs installation for COS to Miami