Dutch design studio OS & OOS has created a range of furniture based on the structure of a rack used to support wood cutting, with each piece made from aluminium pipes.

The collection boasts a minimal, modern aesthetic, and its form takes cues from sawhorses – a four-legged rack used to support wood for sawing.  It included cabinets, clothing racks, benches, stools, and tables.

"Being from Canada myself, I frequently used a sawhorse for cutting fallen trees into smaller pieces, to be later split and used for firewood," Peet told Dezeen.

"The construction of the sawhorse is rather clever and beautiful, due to its simplicity and how well it fulfils its task. We saw a relationship between the extruded aluminium pipes and the logs, and combined it with the sawhorse base to imagine a furniture collection."

The Eindhoven-based studio was inspired to use a combination of anodised aluminium pipes and glass after seeing a video of a 3D tube laser cutter.

"The possibilities to cut such small and detailed sections out of a tube is remarkable, as a traditional milling unit cannot make the sharp edges like the laser can, especially in comparison to how quickly and cost-effective the laser can be run."

This precision-cutting technology gave Peet and Mensen the freedom to construct every piece in the collection without the use of fasteners, such as screws or glue, or welding.

The detailed cuts in the tube allow each piece of aluminium or glass to interlock like joint work as the smaller extruded tubes can be inserted into the larger 200 millimetres tubes.

In an instance where the object would need to be lifted off of the floor, a small taper pin ensures that the smaller tube stays fixed in place.

Aluminium's lightweight properties, its strength, and its recyclability also influenced the studio's decision to use the material.

But the designers told Dezeen that the greatest benefit of using aluminium is that it can be anodised – a technique that creates a hard oxidation layer on the aluminium, that can also be coloured like a dye.

Each piece of pipe furniture comes in a choice of five colours, including champagne, deep red, rose, or anthracite black.

"Aluminum is one of the more abundant materials on earth, and it's also recyclable," the studio said. "But perhaps the greatest benefit is that it can be anodised."

"The anodisation layer has practically no thickness so that we can work with tight tolerances without having to worry about paint or powder-coat thicknesses later in the process, which can result in parts not fitting into one another." 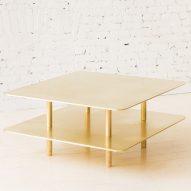 OS & OOS was founded in 2011, after Peet and Mensen graduated from Design Academy Eindhoven. Previously, the pair created a bench and two stools from a synthetic stone that becomes malleable when heated.