A pair of long volumes with pitched roofs form a T-shaped plan in this Malibu home by Welcome Projects, which combines two different characters in one building.

The low-slung Shed House was built and designed collaboratively by Laurel Consuelo Broughton of Welcome Projects and Michael Boyd of Boyd Design, for a client seeking to store and display art.

"They wanted the house to be an exhibition space for a growing art collection, but also 'cozy'," said Laurel Broughton.

Additionally, the client requested that the residence not have a flat roof, yet still have a modern appearance.

"The dual nature of the requests reminded us of an old burlesque act: The Wedding Night. A single performer is simultaneously the bride and groom, engaging in a shifting slight of hand across the stage where two characters are actually one," Broughton said.

The outcome is a building that shifts in appearance as it's viewed from different angles. "We discovered that by combining two separate pitches of sheds, we could achieve a similar slight of hand as in The Wedding Night," said the team.

The main volume, which the designers describe as an "entertainment axis", runs from east to west and includes the home's public areas. Here, tall ceilings and sliding glass doors let in plenty of natural light.

The kitchen, a library, and four bedrooms branch off this central space. Sleeping quarters are located at the ends of the T-shaped plan, providing them with maximum privacy.

Two smaller bedrooms are located to the north, and are separated from the house by a double garage. The others occupy the south and west extremities, and have their own ensuites. Each of these rooms faces the pool, which enjoys views of Malibu's Point Dume.

Interior finishes include pale wood for the floors and ceilings, and a combination of white and slate-coloured walls. This palette matches the exterior, where each of the home's volumes is a slightly different colour.

The architecture is reminiscent of the mid-century modern style that has proven to be an enduring success in California.

The style was popularised by the photographs of Julius Shulman, who documented properties by notable architects such as Richard Neutra and Rudolph Schindler.

Other projects that embrace the same aesthetic include architect Michael Hennessey's renovation of a 1960s property by Joseph Eichler, and another art collector's home overlooking Beverley Hills by Studio William Hefner. 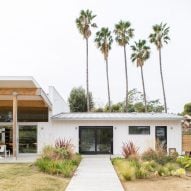